The Lambeth GP Food Co-operative was launched in 2013 and is the first project of it’s kind to operate within the NHS. The Co-operative brings together patients, doctors, nurses and the local community in a people-powered patchwork of food growing gardens across the NHS in Lambeth. The Cooperative aims to harness the physical and mental benefits of gardening whilst producing more local food.

Although Lambeth is becoming less deprived, over 12% of the borough’s population is afflicted by a long-term health condition such as depression or diabetes. These patients also experience high levels of social isolation.

In response to these challenges, GPs at Brockwell Park surgery decided to put some of its green space to use by building a patient-centred garden. This garden provided a safe and secure environment for people with long-term health conditions to learn how to grow food; with growing sessions taking place with the guidance of nurses that also happen to be dab hands at horticulture.

The project has blossomed with funding support from the clinical commissioning group (CCG) and Lambeth Council; there are now 11 GP surgeries transforming unused outdoor space into plots for sowing seeds and bulbs. For those of you doubting the fertile credentials of South London soil, in 2015, one of the patients produced a magnificent lettuce that scooped third prize in a London-wide competition presided over by the Royal Horticultural Society. 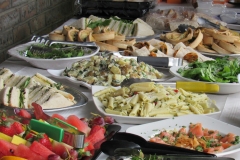 GPs are not only seeing the benefits in terms of the good quality local food produced, the well-being of patients is also improving as a result of being part of the Co-operative. Regular attendees make fewer appointments, feel part of a community and have improved their self-esteem. Moreover, the Co-operative works closely with the NHS Malnutrition project in Lambeth and Southwark, enabling dieticians and nutritionists to work alongside patients and engage with them on the food they eat. This interaction has lead to patients extending the range of plant-based foods they consume and increasing their intake of fruit and vegetables.

The Co-operative chose NHS Sustainability Day on March 24th to launch its next exciting phase. This involves a partnership with Medirest, an Estates and Facilities provider that also looks after food procurement at King’s College Hospital in Lambeth. The goal is to sell the food produced by the Co-operative to the hospital (which already provides land for the project), with all proceeds going back into the day-to-day running of the gardens. Of course, the Co-operative will not be able to provide sufficient food volumes for the 30,000 meals served per month in the hospital but the move to integrate locally grown food into the hospital’s food supply chain is an important example of improving environmental sustainability in the NHS.

Tytus Murphy
Co-ordinator at Divest Parliament
Tytus is a researcher with a PhD in Neuroscience from King's College London. He has in the past completed research for Medact on sustainable diets in the NHS, and currently works with the 350.org to coordinate the Divest Parliament campaign.