Health Through Peace is a community working to bring a stronger health voice into the peace movement. We are working with Health Through Peace partner organisations, peace campaigners and health activists to build a health movement for peace. Our action groups work on advocacy, education and research on nuclear weapons, refugee and migrant rights, and the arms trade.

Medact believes that a health perspective is uniquely placed to address the root drivers of war and conflict; and to work towards peace and a more sustainable idea of security. In November 2015, we ran the ‘Health Through Peace’ conference which saw 700 members of the health community come together to discuss the impact of war, violence and militarism on health. Since then, the health through peace community has been taking forward the energy and vision of this conference.

We want to engage with health professionals and students alongside peace campaigners across the UK to discuss how we can build and strengthen this movement. We need to harness our collective skills and energy, and work together to be effective drivers of a strong and sustainable movement for peace.

In summer 2017, over 200 progressive public health, medical and nursing students and professionals from Asia, Africa and beyond will come to the UK for ‘Health Through Peace 2017’.

As members of the international health community, some of whom gathered at the Health Through Peace conference in November 2015 in London, we note the 1981 World Health Assembly resolution that “the role of physicians and other health professionals in the preservation and promotion of peace is the most significant factor for the attainment of health for all”. 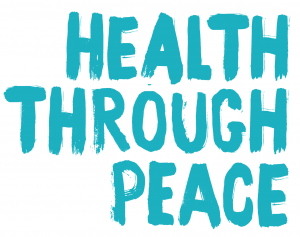 As members of the international health community, some of whom gathered at the Health Through Peace conference in November 2015 in London, we note the 1981 World Health Assembly resolution that “the role of physicians and other health professionals in the preservation and promotion of peace is the most significant factor for the attainment of health for all.”

We believe that a more peaceful future is not only possible, but necessary for good health. As a community, we provide humanitarian relief, treatment, care and protection for the victims and casualties of war. But we also have a duty and mandate to prevent war and violence, and actively promote peace. And so we call upon all health professionals to actively work towards:

1 World Health Organisation, 1981. Health as Bridge to Peace. World Health Assembly Resolution 34.38, 1981, as cited in Health as a Potential Contribution to Peace: “Realities from the field: What has WHO learned in the 1990s.”

2 According to Institute for Economics and Peace, the world as a whole has become less peaceful over the last eight years. There were more wars conducted in 2014 than in any other year since 2000.

3 According to the Stockholm International Peace Research Institute estimates, the volume of international transfers of major weapons grew between 2005–09 and 2010–14, driven primarily by suppliers from the United States, Russia, China, Germany and France.

4 According to UNHCR, 59 million people (1 in every 122 people in the world) are presently refugees or internally displaced because of conflict and violence.