The international arms trade is in direct opposition to efforts to protect and pursue the health of our world and its inhabitants. Not only does military expenditure steal funds away from health systems, climate change solutions, social development and essential infrastructures, but the arms trade itself enables, fuels and escalates human rights violations, violent conflict and poverty, as well as causing astronomical environmental damage.

Despite widespread poverty and hunger, and the climate standing on the brink of disaster, global military expenditure has increased to Cold War levels.

While across the world populations are starving, health systems are collapsing and the climate stands on the brink of disaster, global military expenditure has increased to Cold War levels. 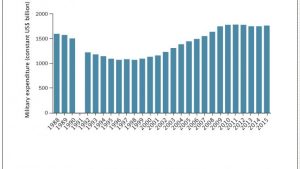 In modern violent conflicts, 90% of those killed are civilians, of whom 80-90% are killed with small arms. (Small Arms: Wrong Hands, Oxfam publications, p. 1, 1998.) The growing availability of small arms is a major factor in the increase of the number of conflicts, which has a knock-on impact on health.