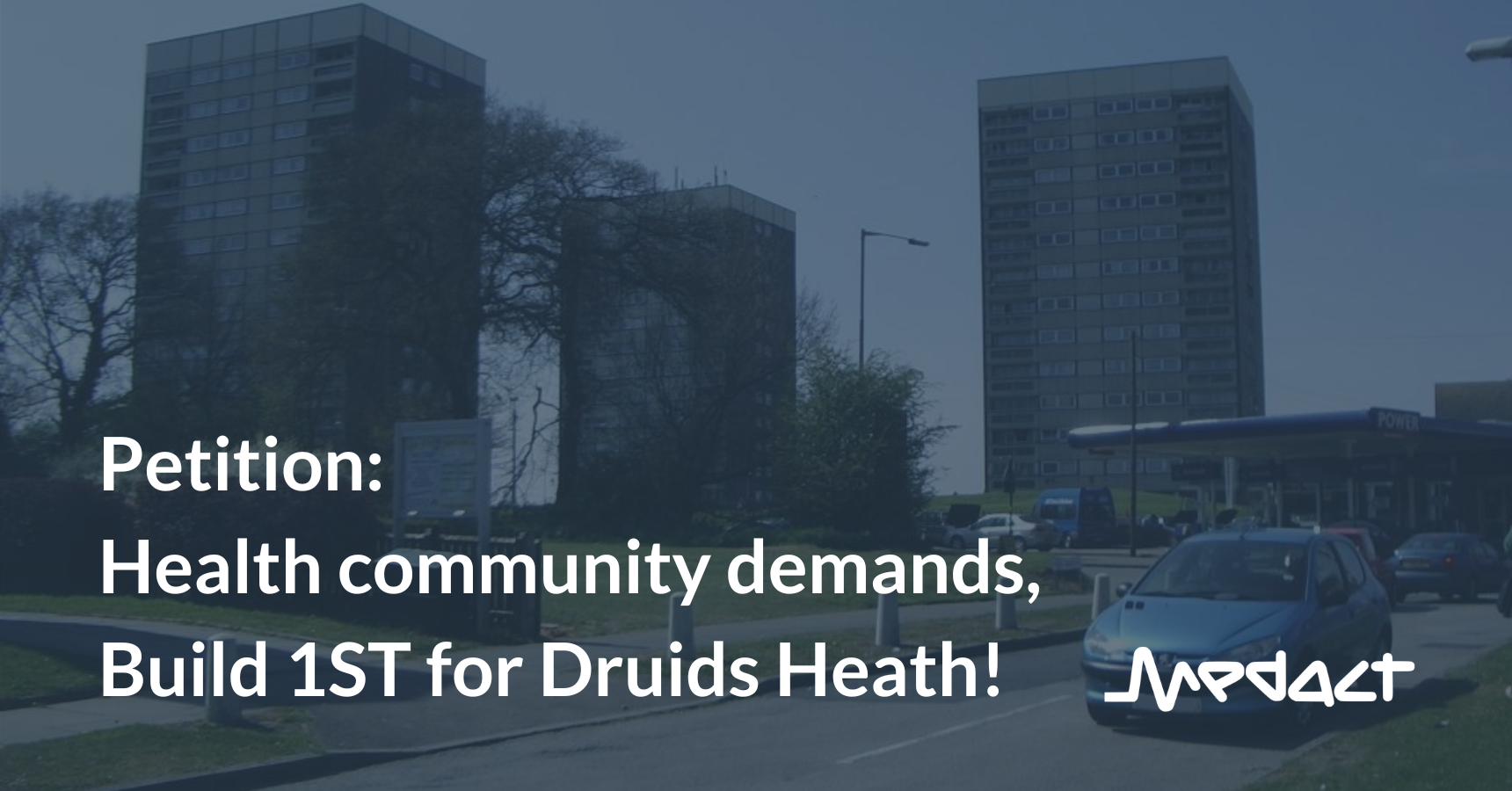 We as health workers are demanding that the council Build 1ST before any further Druids Heath tenants are evicted from their current homes. Building homes first will ensure residents get to move to a new house, stay in the area and only move once, reducing the stress and anxiety that accompanies any move, but especially one you’ve not chosen.

In order to address persistent health inequalities in Druids Heath, Birmingham City Council must ensure that all residents have access to secure and safe housing where residents and their families can grow and flourish.

We stand with the people in the Druids Heath and Monyhull community demanding Build 1ST!

Druids Heath is one of the most deprived areas in Birmingham: 27% of local residents experience deprivation relating to income, and life expectancy and other key health indicators are significantly poorer compared to the English average. It has suffered ‘deliberate decline’ due to decades of underinvestment both regionally and nationally. The council estate, built in the 1960s, is in urgent need of true regeneration of the kind that would ensure that all residents have access to secure and safe housing where residents and their families can grow and flourish.

Instead, it is getting ‘regeneration’: in April 2019, the council began demolishing tower blocks on the estate and relocating residents across the city, in some cases to temporary accommodation. To date, no new homes have been built in Druids Heath to rehouse those who were relocated. Birmingham City Council’s approach is essentially translating into social cleansing. With each relocation, Druids Heath is losing long-standing community, friendships and the place many local children call home.

Build 1ST Druids Heath is a campaign to build first before eviction, ensuring that residents get to move to a new house, stay in the area and only move once, into a permanent, quality home within their communities, alongside a guaranteed right to return for those families who have already been moved.

Build 1ST aims to keep the community together and avoid the costs of social prescribing and the largely ignored negative impacts on children being moved away from schools and their friends. This will bring back those who have been moved from their homes and said they want to return alongside those tenants currently affected by eviction.

Build 1ST means residents are guaranteed to move to a decent clean home, not a substandard, neglected property that many residents have been offered or found themselves in (or temporary accommodation that does not offer a stable and secure home). A secure, good quality home is a precondition for good health and Birmingham City Council should ensure that every tenant from those properties demolished is relocated to a permanent, quality home within their community.

Druids Heath has available land where houses can be built already and the technology is available to build houses quickly that have low heat costs.

Build 1ST adds to social housing instead of taking it away as Birmingham City Council currently is. This would avoid adding to the 15,000+ households currently on the city’s social housing waiting list and making what is already a national housing crisis worse.

Build 1ST to keep the community together and healthy

Build 1ST means children don’t need to move school unnecessarily, losing friends and affecting their education. This would reduce the chronic uncertainty and instability that residents have been facing since 2017. Insecurity is known to be central to mental distress and ill-health.

Build 1ST is a community-led initiative that directly reflects the needs and demands of the community. Supporting the community to deliver on Build 1ST would be a vital step towards real community empowerment and engendering real agency within the community. Feelings of agency and control over one’s world are fundamental to better physical and mental health.

Why is Medact supporting the Build 1ST for Druids Heath campaign?

The EJ group is currently working in Birmingham to support the Druids Heath and Monyhull Community Forum and their Build 1ST campaign – a community campaign organising against the demolition of council housing in Druids Heath. The campaign’s main purpose is not only to ensure alternative council housing, but also to propose community plans that are led and shaped by the affected community and address existing health inequalities in the area.

We are working alongside the New Economic Foundation (NEF). Residents are interested in including a public health angle in their plans, and mobilising support from the health community.

FInd out more and get involved on their group page