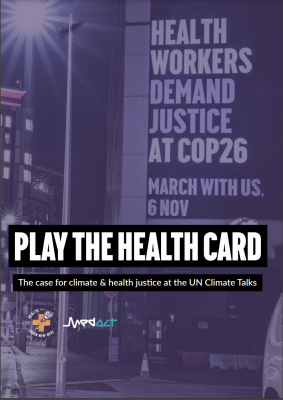 ‘Play the health card the case for climate & health justice at the UN Climate Talks’ was written to lay out the reasoning behind the demands of the Health for a Green New Deal campaign in the run up to the COP26 UN Climate Talks in Glasgow in November 2021. It is an update on our previous briefing, ‘Health & Climate Justice at COP 26‘.

Specifically, this briefing highlights the health-justice case for urgent action – a move oil and gas lobbyist representing companies like Exxon Mobil, while seeking to undermine climate and health research, once infamously called “playing the health card”.

The need for immediate and transformative action has never been clearer. Yet despite its rhetoric of “leading the way” on decarbonisation, the actions of the UK government fail to measure up to the scale of the challenge faced.

‘Play the health card’ sets out four key policy demands to which the UK government must commit in order to achieve the just, sustainable, transformative change required to minimise catastrophic climate change. These demands are:

Find out more about the Medact Research Network

Find out more about Health for a Green New Deal