Net-zero by 2050 is too little too late; some reaction to the Committee on Climate Change Net Zero report

The Committee on Climate Change (CCC), the independent adviser to  the UK Government on climate change, has recently published a historic report advising the Government to set a legally binding net zero emissions target by 2050. While there are some positives in this report – which we can use to force some minimum commitments from our politicians and the Government –   it also has serious weaknesses and the target of 2050 is far, far too late. Here we outline some brief reactions to the CCC’s advice and point to some actions that the healthcare community could take on the back of it.

The Government must act now

Importantly, the CCC is calling on the Government to legislate for a net zero emissions target. The Government can stall no more; it must listen to its own advisory committee and pass emissions reduction targets into law. Healthcare workers can use this to lobby their MPs to pledge their support for a net zero target before 2050. Over 190 MPs have already pledged their support for such a target – even the least climate-concerned of MPs can no longer refuse to support what is now a very unremarkable ask.

2050 for net zero emissions is much too late

However, the target date for net zero can, and absolutely must, be sooner than the 2050 date that the CCC has advised. The CCC identifies a net zero by 2050 target as the UK’s fair share of emissions cuts for an approximately 50:50 chance of avoiding 1.5 degrees of warming. Some small islands nations could become uninhabitable beyond 1.5 degrees. Being willing to gamble with 50:50 odds for the very existence of such countries is utterly unacceptable. Furthermore, it glosses over  the fact that climate change has already gone too far, that it is already impacting the health of hundreds of millions of people and claiming hundreds of thousands of lives every year.  The interpretation that net zero by 2050 is the UK’s “fair share” is also questionable. It implies that the UK must do only a little more than much poorer countries and does not adequately account for the enormous damage the UK had already done though its historic emissions and through the exploitation of countries that it has colonized. It conflicts with the demands of groups who represent, and stand in solidarity with, those who are most impacted by the climate crisis. For example, Wretched of the Earth, along with many of its allies, have called for UK carbon emissions to reach zero by 2030 as part of its fair share to keep warming below 1.5°C.

The UK can and should aim for net zero well before 2050. Ambitious shorter-term intermediate targets must also be set and, more importantly, met. 2050 is 31 years away. Action now, that is legislated through a strategic pathway, year on year, should ensure immediate action. Climate action must transcend the five year political cycles that see politicians relaxed in the face of long-term goals.

International offsetting is off the table

There are some things we can welcome in this report  – and which we should put pressure on the Government to support- including the fact that all greenhouse gasses (not just carbon) are included, as is international aviation and shipping. Importantly, the CCC says  that all emissions cuts should be made in the UK, with no international offsetting or carbon credits. The CCC also says that a commitment to a just transition must be made.

Unfortunately, however, the report is full of serious shortcomings. It allows aviation to continue to grow and does not recommend a total ban on fracking. The CCC also puts too much reliance on carbon capture and storage and other unproven ‘techno-fixes’ such as speculative technologies to remove carbon dioxide from the atmosphere or develop a major supply of carbon neutral synthetic fuels. Rather than advising the Government to make the deep emission cuts and radical changes that the climate crisis requires, the CCC is, to a certain extent, allowing  a slightly greener form of ‘business as usual’ to be continued and then putting the onus on upcoming generations to solve the shortfall through technology. As a result, the CCC report could be cynically used to support Heathrow expansion, fracking and continued exploration for offshore fossil fuels.

Fossil fuel extraction must be challenged

One of the major flaws of the report is that it fails to highlight the need to rapidly phase out UK oil and gas extraction. The potential carbon emissions from the oil, gas, and coal in the world’s currently operating fields and mines would take us beyond 2°C of warming. The reserves in operating oil and gas fields alone, even with no coal, would take the world beyond 1.5°C.Therefore limiting warming to 1.5°C necessitates that no new fossil fuel extraction or transportation infrastructure be built. Furthermore, some operating fossil fuel projects, mainly in rich countries such as the UK, should be closed before their reserves are fully exploited. Despite this, the UK Government continues to allow, and to support, new fossil fuel projects. The CCC’s failure to highlight this inconsistency is very concerning and is something that must be challenged. We won’t stop carbon going into the atmosphere for as long as the fossil fuel industry is permitted to dig up fossil fuels. At present, the Government is continuing to support and facilitate fossil fuel companies. Therefore, the power and political influence of the fossil fuel industry must be eroded if we are to hold warming to 1.5 degrees and make true progress on climate change. The healthcare community can play an important role here; using strategies such as fossil fuel divestment of medical institutions; for further reading on this see our blogs here and here or get in touch with [email protected] 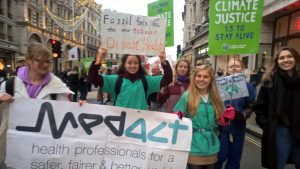