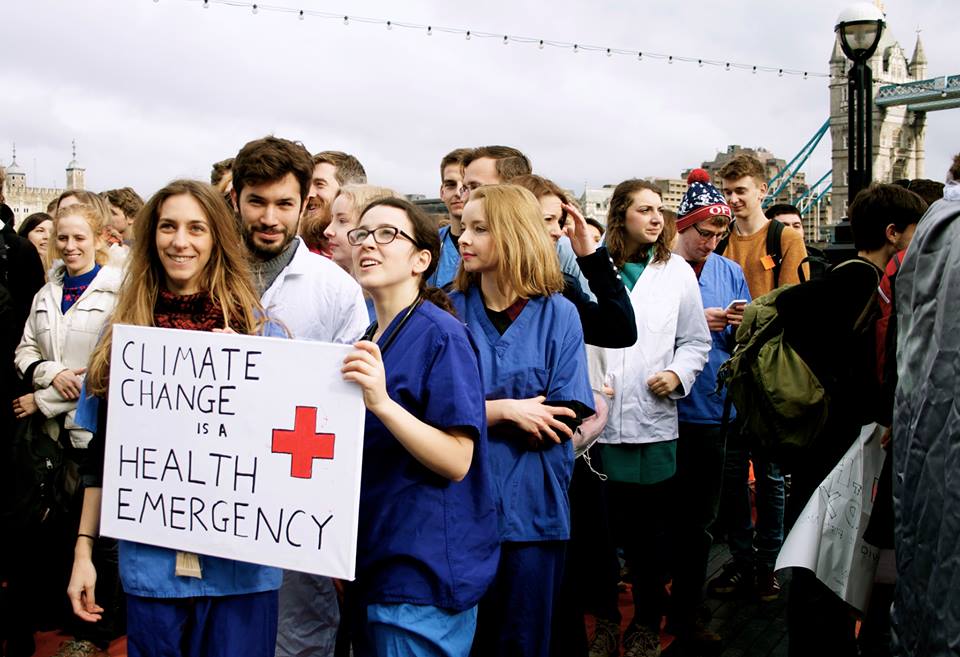 Climate change is already claiming thousands of lives every year and impacting the health of millions of the world’s most vulnerable people.  In 2015, the Lancet Commission on Health and Climate Change warned that climate change could undo the last half century of gains in global health and development. Those who have contributed least to the problem are suffering most from its impacts – making it one of the greatest injustices of our time.  The fossil fuel industry is one of the biggest obstacles to climate progress. In the face of such a huge and powerful foe, it’s easy to feel despairing, even helpless. But the healthcare community can play a key role in breaking this industry’s power and creating the space for the urgent action we need. If you’d like to get involved, why not come along to our Fossil Free Health event on 1st July?

The fossil fuel industry is blocking action on climate change

We’ve known about climate change for decades. We also know that climate change is largely irreversible on human time scales – making action on this issue increasingly urgent and very time sensitive.  Why then, have we taken so long to act? It’s a complicated issue, but one of the most important obstacles to climate progress is the fossil fuel industry. Over many decades, this industry has used all the tools at its disposal, and massive amounts of money, to ensure that climate progress has been as slow and as insignificant as possible. It has orchestrated intense lobbying campaigns to block governments’ action on climate and ensure that the status quo on fossil fuel consumption is maintained.

Many of the big fossil fuel companies claim to support the Paris Climate Agreement. However, behind the scenes they continue to obstruct and frustrate the global shift away from fossil fuels. Exxon Mobil and Royal Dutch Shell spend approximately $50 million lobbying against climate action annually, while simultaneously voicing support for climate action.

In the UK, the industry’s political donations are rewarded by generous Government support for fossil fuels. In November 2017, it was revealed that the UK trade minister lobbied the Brazilian government on behalf of BP and Shell, to achieve tax reliefs for them and address their concerns over environmental regulation. The gas industry has spent millions of euro influencing European commissioners and policy makers to support the construction of new fossil fuel infrastructure. This infrastructure would lock Europe into fossil fuel use for decades and seriously undermine the transition to renewable energy.

International climate negotiations have also been corrupted by fossil fuel influence. A sobering 2017 report by Corporate Accountability, illustrated how fossil fuel companies, through their admission to UN climate talks, “are hijacking the talks, stifling ambition, pushing false solutions, and blocking the financing (and therefore withholding the availability) of real solutions”.

For as long as the fossil fuel industry maintains its influencing power, sufficient action on climate change will be incredibly difficult – if not impossible. There is a chink of light at the end of the tunnel however – and this is where fossil fuel divestment comes in. On a practical level, divestment is the opposite of investment. An organisation can divest from fossil fuels by selling its shares in fossil fuel companies. This makes a strong statement against the fossil fuel industry. It stigmatises the industry, damaging its reputation and helping to remove its “social licence to operate”. Governments and politicians generally prefer to engage with “clean” businesses to protect their reputations and chances of re-election. Divestment is required to make fossil fuel money toxic – and to show that fossil fuel companies are far from clean!

Other divestment campaigns have led to restrictive legislation affecting the stigmatised firms. Two decades ago, the health community played a leading role in the tobacco divestment movement. This movement strengthened public understanding of tobacco associated risks. It put the issue onto the political agenda and paved the way for stronger anti-tobacco legislation.  As fossil fuel divestment gathers momentum, it is heartening to see that bans on fossil fuel related activities are becoming increasingly common in some countries.

More divestment work is needed to stigmatise the fossil fuel industry in the minds of UK politicians. UK health workers could make a valuable contribution to this work. The stigmatisation effect of fossil fuel divestment is enhanced when the divesting institute or person is well regarded by society. The 2017 Ipsos MORI Veracity Index poll put nurses as the most trusted professionals in the UK with doctors a close second. The public will listen to what health professionals have to say about fossil fuels – and politicians know this.

Fossil fuel divestment by UK health institutes, such as medical royal colleges, would deal a significant blow to the social licence and acceptability of the fossil fuel industry.  It would help push health institutes in other countries to divest too. It could also increase the pressure on other UK investors to consider divestment more seriously. This is important, as UK financial and investment industries have significant international influence; pushing them away from fossil fuels could have exciting ripple effects around the globe.

UK health workers, by campaigning for fossil fuel divestment, have the potential to punch above their weight and make a powerful contribution to the fight against climate change. If you’d like to get involved, come along to Medact’s Fossil Free Health event on 1st July or contact Deirdre at [email protected].