Activism, extractivism and the healthcare community

A profit-driven, extractive economy is severely undermining the life support systems of the planet and exacerbating health inequities around the world. The fossil fuel industry epitomises the worst of what drives this system, and is responsible for impacting the health of hundreds of millions of people, through the climate change that it is driving. Those worst affected are people of colour in the global South. Meanwhile the profits of the fossil fuel industry are concentrated in the global North.

Climate change is also driving health inequities within countries; to give just one example, African Americans in Los Angeles are nearly twice as likely to die as other residents of the city during a heat wave. Furthermore, the worst direct health impacts of extracting, processing, transporting and burning fossil fuels—from cancer clusters to asthma—to psychological trauma –  are invariably imposed onto indigenous peoples and on the communities where people of colour work and live. BP has admitted that it won’t frack for fossil fuels in the UK because it would “attract the wrong type of attention” but it has no problem fracking in the global South against the wishes of local people whose lands it is plundering. 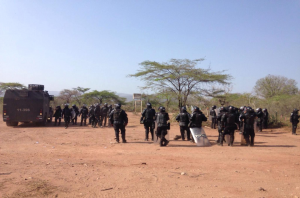 For decades, the fossil fuel industry has spent vast sums of money ensuring that action on climate change is as insignificant as possible. It has funded, and continues to fund, elaborate campaigns of climate denial and misinformation. It has orchestrated intense lobbying campaigns to block governments’ action on climate since the 1980’s and ensure that the status quo on fossil fuel production and consumption is maintained.  Through its funding of politicians, the fossil fuel industry is ensuring that governments continue to make policies and take actions that perpetuate colonialism and ultimately devalue the health and lives of people of colour, indigenous and working class communities.

Our fossil free health work should stigmatise the fossil fuel industry, eroding its political power and showing it up as a driver of health inequity and injustice

The healthcare community and divesting health institutes have an opportunity to highlight the fossil fuel industry’s complicity in driving health inequities and in robbing vulnerable communities of the basic necessities required for human health.

Through this tactic, the  health community can also work to ensure that today’s fossil fuel companies are not allowed to be part of the “solution” to climate change. Even if fossil fuel giants were to transform into renewable energy companies overnight (and they are showing no signs of doing this) there are still deep, structural problems with these companies that will not be solved by a merely changing the product they produce. Therefore, it is highly likely that the continued existence of today’s fossil fuel giants, even as renewable energy companies, would continue to perpetuate health inequities as they extract raw materials and make giant land grabs for renewable mega projects.

Health justice, requires more than an end to fossil fuels, it requires deep fundamental changes to the global energy system. Our Fossil Free Health campaigning, by revealing the fossil fuel industry’s true colours, should strive to contribute to efforts to bring about such changes. We should highlight the need for reparations for the health and lives that have been stolen by the colonial histories that made up a capitalist economic system. We should amplify the stories of those who health has been directly impacted by mining and fossil fuel extraction. We should add to calls for a new energy system that is informed by those who have suffered most from extractivism and climate change, that is centred in local energy democracy and that redistributes wealth rather than concentrating it in the hands of a few giant corporations.

How can healthcare workers get practically involved?

We shouldn’t underestimate the level of change required but neither should we let the size of the task overwhelm us into inaction. There are plenty of practical, manageable actions that healthcare workers can start taking to join the fight for a more equitably powered world. If you’re not involved in Medact’s Fossil Free Health work already please get in touch! Ensuring that our institutions stop funding fossil fuel companies through their investments is a really important part of the change we need to make. But no matter what actions you decide to take, ensuring that your action include ways to stand in solidarity with communities who are most impacted by extractivism is crucial.

To do this work well, we  start by simply listening to those most impacted. Show up to actions organised by global South solidarity groups, build relationships, start figuring out how we can have impact  alongside the struggles that already exist. We should recognise too that being based in the UK gives us an opportunity – and a responsibility – to hold London-listed fossil fuel and mining companies to account. Many of the companies who plunder the global South with impunity have headquarters in London. Their AGMs are held in London or other parts of the UK. We can show up to these AGMs, make investors aware of the real impact of their investments, amplify the voices of impacted communities who come to tell their stories.

On 30th April, Medact is organising an event to coincide with Anglo American’s AGM.  We’ll discuss some practical ways to hold companies like Anglo American to account over lunch at the Medact offices. For example, we’ll look at ways to push for legally binding instruments to regulate the activities of multinational corporations like Anglo American. We’ll then make a short journey to Anglo American’s AGM and hold a vigil outside as shareholders arrive. Will you join us? You can find out more and register on our event page.

Anglo American owns a large stake in the Cerrejón mine, a vast open pit coal mine in Colombia. Cerrejón has been long associated with human rights abuses including displacement, a lack of consultation with indigenous communities and serious harm to the health of local communities. Communities living near the mine are forced to breath air that is heavy with coal dust and filled with the stench of burning. Many children suffer from respiratory problems; some become so ill that they cannot run or shout.  I hope you can join us as we take action to hold this company to account. Standing in solidarity with communities who are resisting its health-destroying operations is incredibly important.