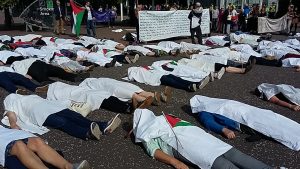 On 26-28 June, the Undersea Defence Technology Conference is set to take place at the Scottish Events Campus (SEC) in Glasgow. Companies involved in the conference include BAE Systems, who have sold weapons to Saudi Arabia, and Babcock International, who are involved in the Trident renewal programme. The conference has been widely criticised and condemned, and campaigners have urged Glasgow City Council to remove their support from the event taking place.

31 health professionals across Scotland have written to Councillor Susan Aitken to voice their objections to Glasgow City Council’s decision to support the conference, highlighting the grave consequences to public health of the destruction of livelihoods, public infrastructure and medical facilities in countries such as Yemen and in Gaza.

Dr. Lesley Morrison, a Medact member and signatory of the letter, said: “As a Scottish doctor with family in Glasgow I am dismayed and very disappointed that the City Council is in any way supporting an event which provides a selling platform for arms companies. To be associated with promoting companies which put profit before human life and suffering is shameful.”

While Dr. James Bogie, another signatory, drew a link between some of his patients and the impacts of conflict abroad: “The health and social impacts of war and the arms trade are clearly understood and are even being felt here in Scotland, with families seeking refuge here from war-torn homelands. As a Doctor I have met patients who are suffering the physical and emotional effects of war. Weapons that are used in foreign combat should not be promoted within our city. The fact that such a fair brings revenue to the city is not strong enough justification for supporting an industry that is leading to such destruction worldwide.” 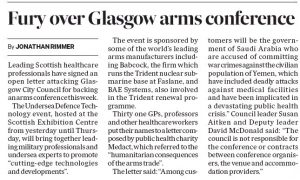 Dr. Michael Orgel highlighted the role of Trident companies in the UDT conference: “The people of Scotland are clearly opposed to Trident and nuclear weapons. But Glasgow City Council support the UDT arms fair event and backed the bid to host it. The arms fair is led by the manufacturers of Trident nuclear submarines (including Babcock) and features Trident renewal. Rather than seeking to bring revenue to Glasgow, the City Council would be helping the people of the city and Scotland more by working to encourage divestment from investment in nuclear weapons. They should also be urging the U.K. government to sign up to the Treaty to Abolish Nuclear Weapons adopted last summer at the UN by a large majority of the of the countries of the world.”

The Scotsman has reported on the letter (26/06/2018) sent by health professionals to Glasgow City Council in print and online.

We are delighted to share that due to mounting pressure from Medact Scotland and others, the council promised not to support arms events in Glasgow again.

As health professionals we are deeply concerned about Glasgow City Council’s decision to support the Underwater Defence Technology conference being held at the SECC in Glasgow on the 26th to 28th June.
This event will be a selling platform for some of the world’s biggest arms manufacturers, specifically BAE systems who are the main source of military exports from the UK to Saudi Arabia and the principal sponsors of the Glasgow arms fair, and Babcock, two of the three main companies involved in the Trident renewal programme. The conference is organised by Clarion Events which is similarly responsible for DSEI, the bi-annual arms sales event held in London

Among customers will be the government of Saudi Arabia who are accused of committing war crimes against the civilian population of Yemen, which have included deadly attacks on medical facilities and have been implicated in a devastating public health crisis – indirectly leading to outbreaks of cholera through damage to water supplies and a starvation risk to millions of people. Representatives of the government of Israel will also be in attendance, whose weapons kill and maim the people of Gaza, with health facilities bombed, medical professionals killed and the siege preventing people from being able to receive necessary and sometimes life-saving treatment.

On a global scale the humanitarian consequences of the arms trade is clear – the direct casualties, environmental destruction and degradation of health services mean that conflict is a major international health issue and reducing conflict is therefore a priority.

At home the people of Scotland have shown that nuclear weapons are not welcome here. And we know that the money our government spends on weapons, including Trident, is money desperately needed by our health and social services.

An international arms trade which puts profit above people’s lives and endangers health is unethical, unjust and wrong. We condemn Glasgow City Council’s decision to support this exhibition and conference, which is all the more surprising given the Council’s ongoing and welcome opposition to Trident renewal.

We call on the Council to make a clear commitment not to support future arms conferences in Glasgow. 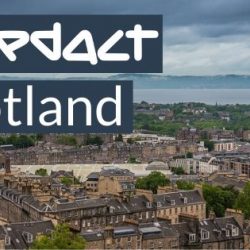