Taking the finger off the red button: De-escalating the risk of nuclear war 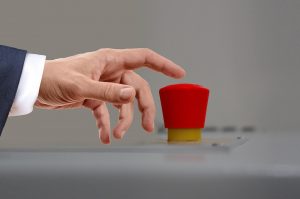 Below, we publish the contents of a talk given by Medact member Dr. Elizabeth Waterston at an event in Newcastle on 10 May 2018.

There is general concern about the impulsive behaviour of the current President of the USA and this article addresses ways of de-escalating the danger of a nuclear exchange.

The 12 kiloton bomb dropped on Hiroshima in 1945 caused total obliteration over a distance of 3.2 km, and fires across 11km2. Some 70-80 thousand people or 30% of the population of Hiroshima died either immediately or over the next few weeks of blast, firestorms or radiation.

President Trump is proposing to use a smaller bomb of 5kt as a battlefield weapon. However, such a bomb is not a battlefield weapon but a weapon of mass destruction. In a diameter of 700m all buildings would be destroyed with 100% mortality. In a diameter of 1km, most buildings would collapse, there would be universal injuries and a 50-90% mortality from radiation in the following days/weeks. Over 2km all windows would shatter, as light travels faster than blast. Those drawn to the window by the flash would get a faceful of shattered glass.

The current world nuclear arsenals stand at about 15,000 warheads, 2,000 of which are  targeted and on hair trigger alert and could be activated by unstable leaders, miscommunication, cyber interference or just by accident. They are owned by 9 states: USA, Russia, China, France, UK, Israel, India, Pakistan, North Korea – all of whom are developing new weapon systems.

Steps to de-escalate the risk of a nuclear exchange
These are actions which could be taken now without cost and just require political will.

Why the nuclear weapons states will not agree to discuss the treaty.

What you can do