Waking up to the planetary health emergency: let’s divest from fossil fuels. 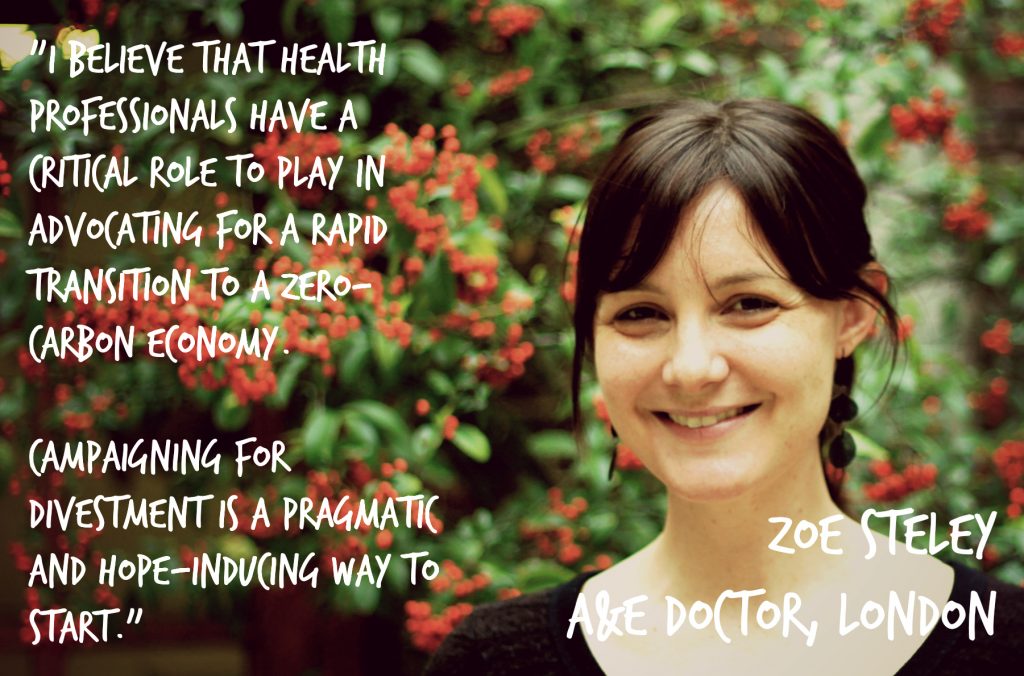 Zoe is a Medact member. She is also part of Divest London – a network hub for the global grassroots movement pushing institutions to divest from the fossil fuel industry – and a supporter of the Fossil Free Health campaign.

I work as an Accident and Emergency doctor on the NHS frontlines in several London hospitals where I witness the downstream effects of Britain’s many structural pathologies – alcohol abuse, obesity, diabetes, depression and anxiety, often against a backdrop of social isolation. I have also worked on health-related human rights issues and volunteered on the Thailand-Myanmar border with a Burmese migrants women’s community organisation.

From these perspectives, I have inevitability become increasingly interested in the economic and political factors that undermine health and strain health systems. After busy, demoralising shifts in the emergency department, I often find myself wondering about the impact of inequality and overconsumption under growth-based capitalism, and what I could be doing to make “the system” better.

Three months ago I woke up to the imminent, existential facts about climate change: we’re set to exceed the international limit of a 2-degree temperature rise within the next 15 years unless 80% of the fossil fuel industry’s declared carbon reserves are rendered “unburnable.”[1] As the UK medical community has stated, this is ‘the global health threat of the 21st Century.’[2] I started reading the growing literature on the climate change, health, inequality and neoliberal ideology[3], and realised the extent to which ecological determinants are fundamental to our collective well-being and survival.

Before this, I’d been disturbed by global warming but had always bumped it down my list of things to think about, let alone do something about. Like many others, it made feel anxious, overwhelmed, and vaguely guilty – like a helpless cog. But when the facts sunk in, suddenly the question “what can I do?” seemed even more pressing.

I became involved in Divest London. I met a lot of energetic, driven, clear-thinking, young (and not-so-young) environmental activists working together on an evidence-based, historically effective strategy to tackle climate change: divestment. I found this inspiring and decided to jump on the Fossil Free Health train.

In a nutshell, divestment is the opposite of investment. It rests on a clear moral premise, articulated by 350.org founder Bill McKibbon,“If it’s wrong to wreck the planet, then it’s wrong to profit from that wreckage.” Governments, public institutions, businesses and individuals have significant financial investments in oil, gas and coal companies and we are asking them to move their money elsewhere.

Divestment sends out a simple yet vital message: that immediate action on climate change does not depend on the political elite, the G20, or the UN. We can start without them. I now realise that a rapid transition to a zero-carbon economy is not only imperative but possible, with the potential to bring profound benefits to global public health.[4]

Health professionals have a critical role in making this transition happen. The various Royal Colleges and organisations such as the Wellcome Trust can help lead the way, as the BMA did in June when it voted to end its investments in fossil fuels – the first health organisation in the world to do so.

The diagnosis is in; now urgent action is required. To address this planetary health emergency, we all need to become environmental activists and change the way we use our resources. As a doctor, campaigning for health institutions to divest is a pragmatic and hope-inducing way to start.

Join Zoe and others in London on Saturday 14th February for Global Divestment Day. Medact and Healthy Planet UK will be bringing the social clout and professional mandate of doctors, nurses and allied health to strengthen the global call for divestment. Join us in London or to find an event near you, visit the Fossil Free UK website.