Briefing launch: The Public Health Case Against the Policing Bill 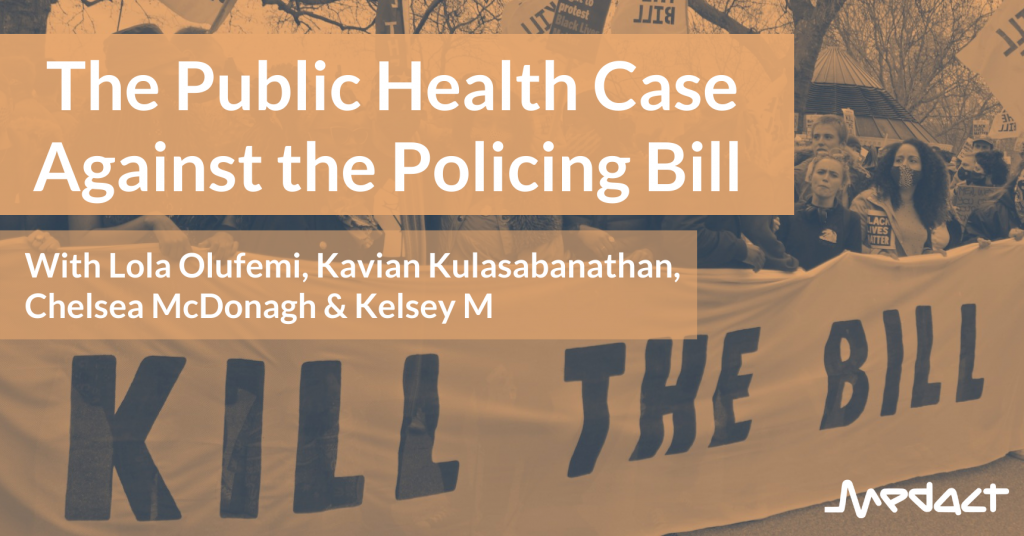 Please join us for the launch event of The Public Health Case Against the Policing Bill.

The government has misleadingly branded the racist and dangerous PCSC (Policing) Bill a “public health approach” to combating serious violence. But health workers in the Medact Research Network have debunked these claims in a new briefing.

Written to support the huge groundswell of opposition to this bill in the #KillTheBill movement, the briefing explains why the measures in the Bill – greater police powers, repression of protest, harsher prison sentences, erosion of confidentiality and increased criminalisation of Gypsy and Traveller communities – will actually harm public health  and entrench discrimination.

We aim to articulate and amplify radical public health voices against the Policing Bill’s approach and explore potential alternatives.

You’ll hear from health workers who are members of our Research Network and involved in creation of the briefing, and we’re thrilled to host four fantastic speakers who will discuss public health in the context of crime, policing and prison:

Lola Olufemi – Lola is a black feminist writer and researcher, author of Feminism Interrupted: Disrupting Power and Experiments in Imagining Otherwise. Alongside writing, she is a member of ‘bare minimum‘, an interdisciplinary anti-work arts collective. Lola also facilitates reading groups/workshops, occasionally curates, and is volunteer co-ordinator at the Feminist Library in South London.

Kelsey M – Kelsey is a feminist, abolitionist organiser based in London, resisting state violence and working to explore and build transformative justice and community-led responses to violence. As a facilitator with grassroots collectives she delivers workshops exploring community accountability, bystander intervention, power, and tools for campaigning and movement building.

Chelsea McDonagh – Chelsea is a researcher, Irish Traveller activist and writer. She speaks on a wide range of issues affecting Gypsy and Traveller people including education, health, policy and politics. Chelsea is one of the co-founders of the Rom Belong programme, a KCL Widening Participation programme for Gypsy, Roma and Traveller pupils and is passionate about improving opportunities for young people.

Kavian Kulasabanathan – Kavian is a paediatric A&E doctor and researcher at the University of Oxford. His interests span socio-political determinants of health, particularly pertaining to race and class, alongside community-centered models of care. Kavian organises with PHM-UK and Race & Health collective.

Presenters will cover topics such as the future implications of the PCSC bill, different visions of public health, new approaches to care, and approaches to ‘serious violence’ and socio-economic issues that don’t rely on punitive or carceral responses. There will be lots of time for audience questions!