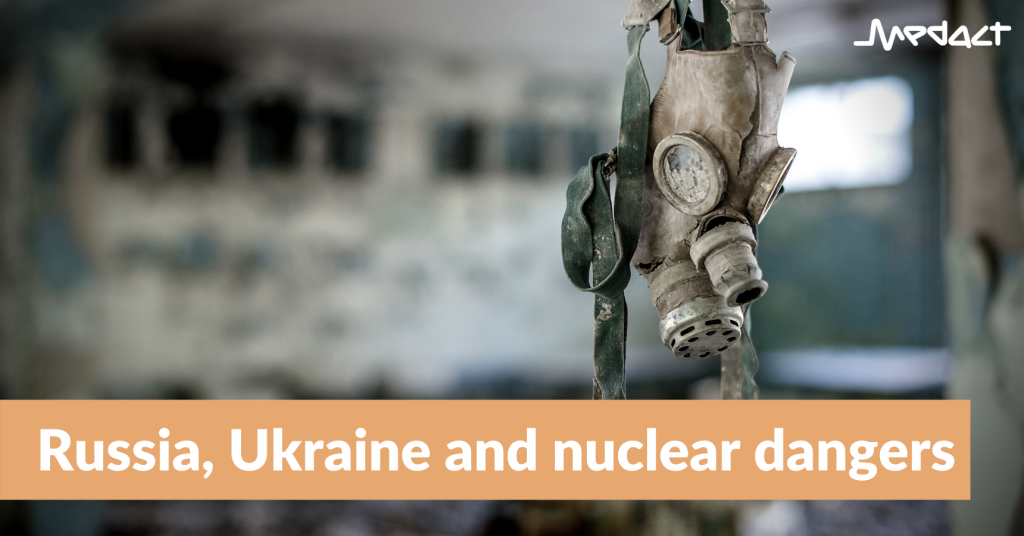 The mounting evidence of atrocities affecting Ukrainian nationals, including health-care professionals and farmers in Ukraine’s breadbasket, is of great concern. Sadly, these are not unprecedented: in 2021 the International Red Cross counted 3,780 attacks and cases of obstruction between 2016 and 2020, mostly in Africa and the Middle East. Their figures are almost certainly underestimates.

Behind the awful situation in Ukraine is the equally appalling spectre of the world’s nuclear industry. An operational error at Chernobyl in 1986 caused the nuclear core to explode, igniting its graphite moderators and sending radioactive clouds around the northern hemisphere. The dead reactor is now encased in a ‘sarcophagus’ surrounded by a 1000 square mile exclusion zone, but by February 2022 there were 15 active nuclear power plants (NPPs) at four other Ukrainian sites. These are better designed, have no graphite and supplied more than half of Ukraine’s electricity, but remain vulnerable to attack.

How do NPPs work?

As in fossil-fuel power plants, electricity is generated from steam turbines. In NPPs the steam comes from water boiled by the nuclear fuel while its uranium decays to highly radioactive spent nuclear fuel (SNF). Overheating is prevented by ‘moderators’ but constant monitoring is needed. Newly extracted SNF is so hot that it must be cooled under water for years before ‘safe’ storage in dry containers can begin; even so, dangerous radioactivity remains for millennia.

Nuclear electricity is far more expensive and less flexible than renewable, but the nuclear weapons states want to preserve its technology for military purposes, and build more NPPs.

What happens in a nuclear detonation?

A nuclear bomb’s ‘pit’ contains more concentrated forms of uranium. When detonated, there is a highly radioactive flash, an intensely hot fireball and a huge explosion. The bombs on Japan in 1945 had a firepower of 20 or so ‘kt’ (a ‘kt’ represents the explosive power of 1,000 tons of TNT). The fireball in a thermonuclear warhead is used to ‘fuse’ hydrogen isotopes into helium.  Each UK warhead is thermonuclear with a firepower of up to 100 kt.

Anything within the fireball will be vapourised. People outside it but exposed to the flash may receive a thousand times more radiation than from a year’s natural background and die within days.

The table below shows the effects of a single detonation. Over 100 square miles (5.5 miles radius), ten 100kt bombs are far more destructive than a single 1,000kt bomb. The casualties from just one bomb would swamp all acute care services across the UK.

Modern weapons consist of nuclear warheads on ballistic missiles. Each missile carries several warheads and scatters them so that much more damage is done than would be by a single bomb with the same gross firepower. 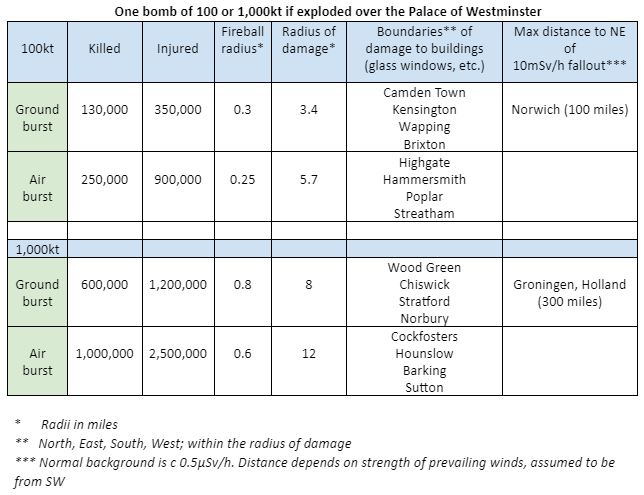 Experienced climatologists describe how 100 medium-powered 16 kt bombs (about 1% of the world’s nuclear warheads) detonated over cities would loft 5 million tons of Black Carbon particles into the upper atmosphere. Global productivity, especially food supplies, would be disrupted to a historically unmatched degree. Larger exchanges could starve billions to death. This would add to the impending crisis of anthropogenic climate warming.

How nuclear bombs could be used in Ukraine

‘Nuclear deterrence’ posits that faced with overwhelming destruction, nuclear armed states would avoid ‘mutually assured destruction’ (MAD) by never fighting each other with nuclear weapons. However, their modernisation programmes (which include the developments of advanced warning systems; defence shields; bigger, faster and more accurate missiles; drones; Artificial Intelligence and ‘Big Data’ – none  of which can be foolproof) and applying them to the waging of a limited nuclear war in which a few low-yield weapons (1 to 10 kt) are used against invading armies rather than populations, the nuclear armed states are looking to circumvent the various arms-reduction treaties they have ratified. This is a form of bluff which carries an unacceptably high risk of retaliation which most analysts predict would escalate to a full-blown nuclear exchange.

Threats to use nuclear weapons against Ukraine were made some months ago and outbuildings at a Ukrainian NPP were hit by conventional rocket fire – a form of ‘dirty nuclear war’ as a direct hit would cause an environmental radiation disaster. The longer the action in Ukraine lasts and the more frustrated Russian leaders become, the more the threat of ‘limited war’ increases, as would the possibility of miscalculation, mistake or ‘rogue’ nuclear detonation.

Can we get rid of nuclear weapons?

Apart from historical bilateral treaties for arms control, the Ukrainian experience shows the folly of the politics of nuclear weapons. Also, it cannot now be said that ‘no-one would attack an NPP’. 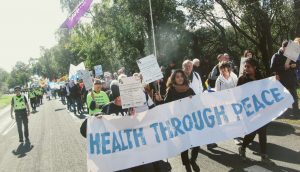 Nevertheless, the Treaty on the Prohibition of Nuclear Weapons offers the best way forward but requires complete changes of hearts and minds. This can only be achieved by cease-fires and continuing diplomacy, backed-up by relief of suffering. The chances of success would benefit from tackling the consequences of global economic inequities, much of which is a legacy of colonialism and unbridled greed, corruption and financial chicanery associated with Free Market capitalism. Meanwhile, the anthropogenic climate crisis is looming ever larger, yet has been forgotten by many world citizens. IPPNW, Medact and allied organisations are well placed to reverse this collective amnesia and the global economic inequities – in accord with our mission for health and peace.