Cost of inequality crisis: Statement on the so-called ‘cost of living crisis’ 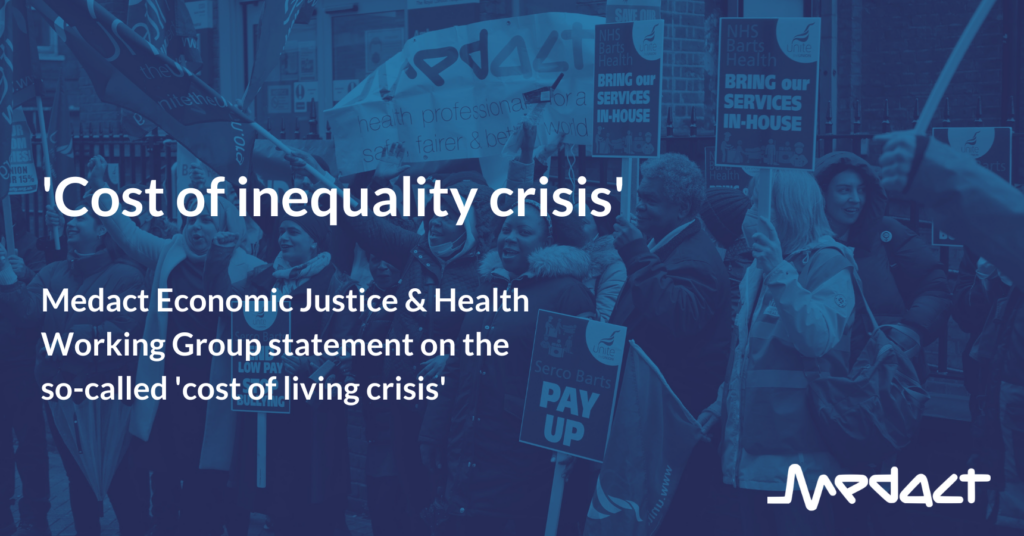 We are writing as healthcare professionals to express our grave concern about the impact of the so-called ‘cost of living crisis’ on our collective health. We call on the UK government to mitigate the impacts on the most vulnerable and commit to building an economy that works for the prosperity and health of people and the planet.

The so-called ‘cost of living crisis’ is the tip of the iceberg of an economy built on unstable and unjust foundations. It is characterised by precarious employment and falling real terms wages, a housing sector unfit for meeting human needs, an unfair and opaque tax system, years of cuts to public services, and reliance on a privatised and deregulated, fossil-fuel dependent energy industry. Rather than just a ‘cost of living crisis’, we are facing a ‘cost of inequality crisis’.

As healthcare workers, academics and volunteers, we see first hand how the price paid is a humanitarian disaster. Our under-resourced and under-staffed A&E departments are overwhelmed with children and young people with acute unmet physical and mental health needs, all of which have long-term implications for tomorrow’s adults. Many of today’s adults, older persons and people living with disabilities are unable to get the support required for dignified living owing to exorbitant rents, unaffordable energy bills made worse by Europe’s worst-insulated homes and absence of meaningful welfare support, all resulting in poor health and shortened lives.

All the while, oil giants are in receipt of record profits and returns for shareholders whilst bankers are having their bonus caps lifted. The gap in wealth between the richest and poorest has widened to levels not seen since 2010, according to the government’s own figures.

Friday’s announcements do nothing to address existing economic inequalities and disregard all the families struggling through a cost of living emergency with policies that only benefit the richest. Under the announced income tax policy, the poorest 5% will save just £22.12, whilst the richest 5% of households will gain an extra £9,187 a year. This scandalous fiscal intervention has arrived shortly after misguided cuts to part time benefits which will only push further people into poverty, at a cost to the health of thousands.

Far from ‘building back better’ and ‘levelling up’ it appears nothing has been learned from the economic harms of the COVID-19 pandemic response and twelve years of government ‘austerity’ policies. Mounting evidence demonstrates how widening wealth inequalities mirror widening health inequalities. Despite this, the government has the capabilities to mitigate the impact on the most disadvantaged as other state responses to the cost of living shocks have shown.

Urgent action is needed to prevent this economic crisis enabling a worsening health emergency. We call on the government to implement the following:

Are you a health worker who wants to get involved in campaigning for economic justice? Get involved in the Medact Economic Justice & Health Group!

FInd out more and get involved on their group page