Healthcare bodies are dumping their fossil fuel investments in ever increasing numbers. Just last month the British Psychological Society committed to divest from fossil fuels, following a major divestment announcement by the Royal College of GPs. Today we are delighted to announce that the UK Faculty of Public Health has ended all investment in gas, oil and coal companies.

The Faculty of Public Health is the leading professional body for public health specialists and practitioners in the UK. Its decision to cut ties with the fossil fuel industry follows the publication of the 2018 report of the Lancet Countdown on health and climate change. This authoritative report warned that a lack of progress in addressing climate change would threaten “both human lives and the viability of the national health systems they depend on, with the potential to disrupt core public health infrastructure and overwhelm health services”.

The Faculty of Public Health divestment announcement coincides with climate finance talks in Katowice, Poland during the COP24 UN climate negotiations. COP24 is being sponsored by coal and other fossil fuel companies. This worrying sponsorship highlights the the need for fossil fuel divestment to erode the social acceptability of fossil fuel companies and break their influence over politicians and policy makers.  Coal power is having significant negative impacts on public health in Poland; its use has been directly linked with severe health problems due to air pollution. Polish cities sometimes have denser smog than New Delhi or Beijing.

The fossil fuel industry poses a deadly threat to human health and lives. Fossil fuel driven climate change is already impacting the health of millions and threatens to reverse the last half century of gains in global health. Fossil fuels are also a major contributor to air pollution, which kills 7 million people every year, according to the World Health Organisation.

Commenting on the divestment decision the Treasurer for the Faculty of Public Health, Dr Ellis Friedman, said

“Climate change is a massive public health issue so we’re really pleased to announce that we will no longer be investing in fossil fuel companies because protecting the public’s health is of paramount importance to us.”

“We know that other Medical Royal Colleges are considering whether they will disinvest in fossil fuels too and we look forward to contributing to this process.”

“We warmly welcome Faculty of Public Health decision to divest from fossil fuels.”

“By divesting from fossil fuels the Faculty of Public Health is making an important contribution to global efforts to accelerate the transition to a renewable powered energy system. A fossil-free world can be a safer, more equitable world with huge co-benefits for human health.”

If you would like to get involved in Medact’s fossil fuel divestment work, please email [email protected]. 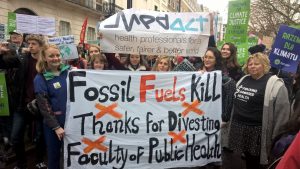