Monday 23rd October saw the introduction of mandatory checks on residency and immigration status of patients in NHS hospitals, followed by demand of upfront payment for care from those who can not prove their eligibility. Medact is incredibly concerned about the implications of these checks on a number of levels. 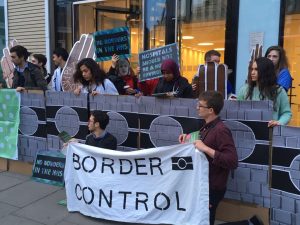 On Monday, we joined Docs Not Cops for a day of action to end immigration checks in the NHS. We called on the Government to see #PatientsNotPassports, stop scapegoating migrants, and to fully fund the NHS.

We gathered outside the Department of Health’s offices in Central London in the morning demanding the Government scrap this racist policy. We also participated  in coordinated social media action later in the day – posting selfies with the slogans “I’m a [doctor] /[Nurse] / [Midwife], not a border guard” or “I’m a patient not a passport”. 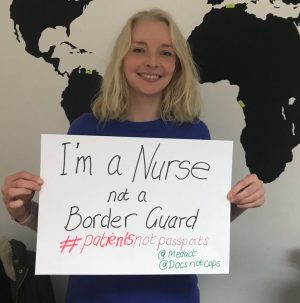 Dr Jess Potter, Chair of the Refugee Solidarity Group wrote for the Independent explaining that a ‘founding principle of the NHS was destroyed’ on Monday. Dr Roghieh Dehghan, another member of the Group presented an emotive take in the BMJ on what the changes meant for migrant doctors. Similarly, Dr Piyush Pushkar, Co-chair of  Medact Manchester explained his arguments against the charges in the Huffington Post.

The action outside the Department of Health was covered by Al Jazeera, The Huffington Post and Buzz Feed.

Medact Manchester held a sister action in the afternoon.  Co-chair of Medact Manchester, Dr Ruth Wiggans was on the BBC Today programme on Monday morning talking about why these charges were a bad idea. She also discussed newly released research which highlights the lack of knowledge amongst healthcare professionals with regard to health care access eligibility in the NHS. Dr Wiggans blogged about the research and also spoke to the Guardian’s Damien Gayle explaining that:

“It is clear that NHS staff do not have the training and support they need to correctly identify who is and isn’t entitled to healthcare.What we’ll see as a result is people who should be receiving NHS care being wrongly turned away or simply being too worried to seek help themselves.”

We received news of a small victory on Tuesday 25 October as the Government confirmed that school nurses and health visitors will not be expected to enforce new NHS charging rules for migrants. While this small victory has been a great boost for the tireless work of our members, our work continues and we still need your support in demanding that the Government scraps this racist policy.