On Sunday 8 October, the Scottish National Party (SNP) voted overwhelmingly in favour of raising the minimum enlistment age from 16 to 18.

SNP’s youth branch, which tabled the motion, used our research and other resources to argue that joining the armed forces under the age of 18 increased the risk of death or injury from combat, self-harm, suicide and post-traumatic stress disorder. You can watch the debate on BBC Player (from around 1:45). 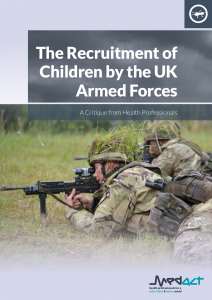 Last year we released Britain’s only public health report into the long term health impacts of the British military’s recruitment of children. We are working on a follow up report with Forces Watch, which looks at military recruitment marketing campaigns.

The report, to be released early next year, offers fresh analysis of the controversial techniques used in recent and current UK military advertising campaigns. It discusses the language used to target children for recruitment, the ways in which this target audience is represented and the role of class, ethnicity and gender.