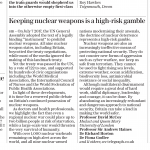 To coincide with the launch of new Medact report ‘A safer world – Britain’s harmful dependence on nuclear weapons’  on Tuesday 25th July 2017, leading UK health professionals wrote a letter in The Telegraph reiterating the international significance of the Treaty on the Prohibition of Nuclear Weapons, and calling for renewed public debate on Britain’s continued possession of nuclear weapons.

SIR – On July 7 2017 the UN General Assembly adopted the text of a legally binding ‘instrument’ to prohibit nuclear weapons. All nine nuclear weapon states, including Britain, boycotted the treaty negotiations, while most of the mainstream media ignored the making of this new, landmark international treaty.

Yet this Treaty was passed in the UN by a vote of 122 to 1, and actively supported by hundreds of civic organizations including the World Medical Association, the International Council of Nurses and the World Federation of Public Health Associations.

In light of these developments, it’s time for a renewed public debate on Britain’s continued possession of nuclear weapons.

As doctors and health professionals, we highlight the fact that even a limited regional nuclear war could place up to 2 billion people at risk of starvation, and that a large-scale nuclear war would threaten the very survival of humanity.

With over a thousand nuclear warheads remaining on high alert across the world and all nine nuclear-armed nations investing in the modernization of their nuclear arsenals, the doctrine of nuclear deterrence represents a high-risk gamble.

Nuclear weapons are also an increasingly ineffective means of protecting our national security. They do not counter new forms of aggression such as cyber warfare, nor keep us safe from acts of terrorism. And they cannot be used to fight sea level rise, extreme weather, ocean acidification, biodiversity loss, antimicrobial resistance or increasing social inequality.

Although multilateral disarmament would require a great deal of hard work, skillful diplomacy, leadership and some courage, it can be done. By abandoning our reliance on an increasingly redundant and dangerous approach to national security, Britain can take a lead in making the world safer.