This autumn, a team of medical volunteers from the Medact Refugee Solidarity Group are visiting French port towns to provide first aid and bear witness to the unimaginable human tragedy taking place on the UK ‘border’.

The trip has been arranged in response to the worsening conditions of refugees stuck in the French channel ports. Our government is treating the plight of our brothers and sisters, forced to leave their countries due to violence and poverty and living in limbo in towns less than  21 miles from our border, as ‘somebody else’s problem’.

The UK government has heartlessly and shamelessly closed its door on some of the most vulnerable and helpless children in the world. What was initiated with much hope and optimism – the Dubs amendment to the Immigration Act – which proposed to relocate to the UK  3,000 unaccompanied refugee children – has been scrapped. Earlier in the year the Home Office ended Britain’s pledge having taken in less than 200 children. To give an idea of the scale of the crisis, there are almost 100,000 unaccompanied children living in Europe. 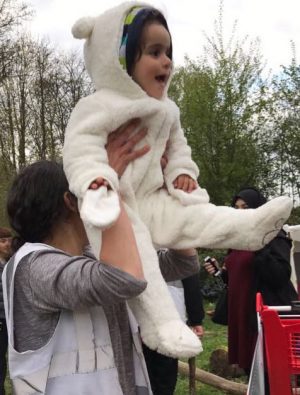 6 month-old Sarya sleeps in a small tent in the forest with her parents and two siblings (April, 2017)

Instead the government has been busy spending our tax money on clearing refugee camps and building walls in Northern France.  Our government spends around £70 million a year on security measures designed to keep the world’s most vulnerable people (including children like Sarya) out of the UK.

Our taxes – approximately £2.3 million – have been used to build the ‘Great Wall of Calais’ – a 4-meter-high, 1-km long wall – separating the Calais camp from the dual carriageway leading to the port. The so-called jungle camp in Calais was cleared in October 2016 and the camp in Dunkirk tragically burned down in April 2017. While the camps are gone, the people remain. Those who called the two camps ‘home’ sleep rough in forests, bushes and squats. They face daily humiliation and beatings from the French riot police, the Compagnies Républicaines de Sécurité (CRS), whose operations in Northern France are also allegedly funded by the British taxpayer. Earlier in the week, Help4Refugee Children, saw a three-year old with a baton bruise on his face.

While most refugees are male (who are as deserving of our compassion and solidarity), there are big number of families and many unaccompanied minors sleeping rough too. The words homeless and children should never be written in one sentence. 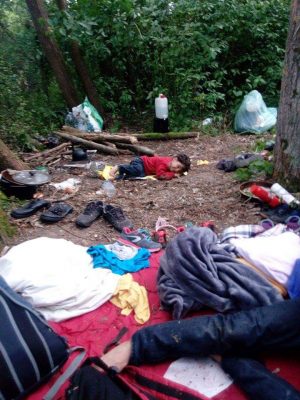 The solidarity trip to Northern France will be arranged with the Refugee First Aid & Support Team, a dedicated group of healthcare professionals who have been volunteering in Calais and surrounding areas for many months.

Please contact me if you are interested in joining the volunteer team or want to get involved with the wider work of the Medact Refugee Solidarity Group. Everyone is welcome, students, professionals, those working in the health community and those outside of the health community.

We also encourage you to sign the following petition: “Theresa May: End Inhumane homelessness of Refugee Children in Northern France.”