Every year, on the anniversary of the horrific devastation of the world’s first nuclear bombing, our Hiroshima Day Appeal provides vital funds for our work to advocate for a safer world free from the threat posed by nuclear weapons.

This treaty provides a new opportunity to re-energize efforts for multilateral nuclear disarmament to which Britain could contribute.

While nuclear weapons states including the UK have, until now, stood on the sidelines, the progress made in these negotiations is testament to the growing weight of international opinion in favour of a total eradication of nuclear weapons.

A growing scientific understanding of the existential risk associated with the continued deployment of nuclear weapons has been a vital factor.

At Medact we have been working hard to advance the public health case for a nuclear free world, and in particular pushing for the UK to join the tide of progress in rejecting the dangerously flawed logic of nuclear deterrence.

In our new report, A Safer World: treating Britain’s harmful dependence on nuclear weapons, we set out the counter-arguments to Britain’s current adherence to its nuclear deterrence. The report re-examines the case for Trident in light of the ban treaty, and puts forward our prescription for a safer world based upon developing a more holistic approach to global security. 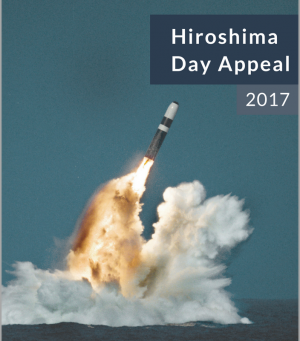 Now, more than ever, we need to make sure these arguments are heard. In the coming year, we need to reach out to the public, to challenge the misinformation and misunderstanding about the safety and value of nuclear weapons; to parliamentarians, to ensure we have a new debate about Trident in light of the ban treaty; and to trade union leaders, to show them that Trident renewal is not in the public interest.

After all, while the ban treaty represents a positive step, in reality the risk of nuclear weapons being used – mistakenly, accidentally or stupidly – has probably grown this past year.

To continue to advocate for a safer, fairer world, free from the threat of nuclear catastrophe, we need your help.

Please, if you can, support this year’s Hiroshima Day appeal.