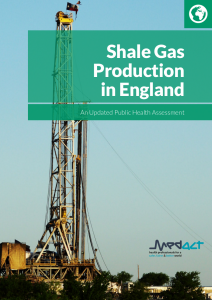 Download: A Public Health Assessment of Shale Gas in England

Medact’s new report summarises the findings of a public health assessment of unconventional shale gas production in England.  In 2015 Medact published its first report on this subject, Health & Fracking, which outlined the potential impacts on health of fracking in the UK.  Since the release of that report over 350 academic papers of various sorts have been published, examining the impacts of high volume hydraulic fracturing (HVHF) for shale gas on air and water quality, health, climate change, social wellbeing, economics, noise and light pollution, and seismic events.  This new report updates the findings of a review of the more recent evidence.

David McCoy, the report’s lead author states that ‘the biggest threat posed by shale gas is via global warming, but there are also direct risks to the health and wellbeing of local populations. What is striking is the lack of an integrated social, economic, environmental and health impact assessment of fracking”.

Medact’s view that the UK should abandon its policy to encourage shale gas production remains unchanged.

In arriving at this view, Medact carefully considered the arguments put forward by the industry-funded Task Force on Shale Gas, which was chaired by Chris Smith (former Chair of the Environment Agency and former Secretary of State for Culture, Media and Sport) and which concluded that shale gas production in the UK would be safe, economically beneficial and important for the UK’s energy security. Medact’s latest report disagrees with their conclusions and explains why.

Alongside the new report, Medact has produced a longer, more detailed and fully referenced set of notes about the many aspects of the debate over the safety and value of shale gas production.

Since Medact’s first report, David McCoy has provided expert witness testimony to the public inquiry into fracking in Lancashire. The release of this report comes days after Secretary of State for Communities and Local Government Greg Clark has received a recommendation from planning inspector Wendy McKay following the inquiry, regarding whether the local planning decision to deny exploration licenses to the gas company Cuadrilla should be overturned.  The contents of the recommendation have not been made public.

In June, Scotland and Germany voted in favour of national bans on fracking on environmental grounds.

Hazardous pollutants are produced at all stages of the shale gas production process.  The range of pollutants are outlined in the report.  Based on current evidence it is not possible to conclude that there is a strong association between shale gas related pollution and negative local health effects.  However, there is clearly potential for negative health impacts.   In particular, there are risks of (i) adverse reproductive outcomes due to exposure to endocrine disrupting chemicals, (ii) risk of respiratory effects resulting from ozone and smog formation, (iii) stress, anxiety and other psycho-social effects arising from actual and perceived social and economic disruption.

A special consideration in England as compared with the US is that there may be a greater risk of well integrity failure due to the heavily faulted nature of the geology.

Evidence is strongest regarding the risk that shale gas will accelerate climate change.  Recent evidence of a rise in global atmospheric methane concentrations, which poses a global warming threat, points to recent oil and gas production in the US as one of the causes.