Medact response to the Chilcot Report

This morning, members of the Health Through Peace community joined a peaceful protest over the Chilcot report. We believe that this inquiry has fallen short of any real investigation into the principal casualties of the war, -the people of Iraq. We also believe that we still need to see a stronger and more constructive call for investment in nonviolent responses to conflict.

While the Saddam Hussein regime was brutal, undemocratic and oppressive, the launch of a war to depose him was also at its root brutal, undemocratic and oppressive. Bush and Blair have much to answer for, but they are mostly figureheads of a much wider political and military establishment that allowed, if not encouraged, the ensuing destruction of lives and the ongoing destabilization of the region. The greatest adverse health consequences of the Iraq War were, and continue to be, faced by Iraqi civilians. Hundreds of thousands of non-combatants were killed, about 5 million civilians were displaced and many are suffering due to the catastrophic damage done to healthcare systems.

The Lancet has consistently covered the health consequences of the 2003 invasion and subsequent conflict. The impact of war on healthcare in Iraq has been devastating. Consider that Iraq had a highly advanced healthcare system and swiftly improving health indicators in the 20th century, until the first Gulf War of 1991, (also a war waged by coalition forces led by the United States), which destroyed health infrastructure. The Iraq War of 2003 proceeded to shatter Iraq’s primary health care delivery, disease control and prevention services, and health research infrastructure. Between 2003 and 2007, half of Iraq’s remaining 18 000 doctors left the country. Due to the exclusion of remote areas from state reconstruction and development efforts, thousands of Iraqis still do not have access to essential healthcare. t has published a report named ‘Mental Health Policy in Iraq since 2003’ which states: ‘the acute “shock and awe” stage of the invasion was followed by continuing pervasive human rights abuses and daily violence, which have taken a toll both on individuals and society.’  A 2007 survey by the government and WHO found that more than a third of respondents had ‘significant psychological distress’ and presented potential psychiatric cases. A 2009 government mental health survey concluded that mass displacement and a climate of fear, torture, death and violence have contributed to this high ratio of mental illness.


The Medact report also states that ‘the fragility and chaos in post-invasion Iraq has led to “violence and mismanagement in the health sector”’ in which ‘death threats against doctors, kidnappings, extortion and murders [have posed] a significant threat to the health workforce.’

According to Pax Christi, the use of white phosphorus and depleted uranium in British and American ammunition may have increased cancer rates and increased birth defects, -and the Costs of War project determines that that the severe environmental damage caused by the war will have long term impacts on health.

The Iraq Body Count project has long voiced concerns over the lack of interest in the Chilcot report into thoroughly investigating all the casualties of the Iraq War.  Medact wholly concurs with their statement that:

“22k of 2.6m words in Chilcot’s report are on civilian casualties in Iraq. This is more than expected, especially when one considers the scant references in the evidence presented in open sessions. However Iraqi casualties need much closer attention than this.”

As for the coalition casualties, 4,809 members of the coalition were killed during the Iraq campaign. 179 of these deaths were UK personnel and 4,495 were from the USA. However, these numbers only count those who were employed by the militaries of their respective countries. Around 500 private contractors also died during the conflict, approximately 200 of whom were private military contractors. Many of these private security contractors were guarding or involved in reconstruction programmes put in place by the coalition, following the removal of Saddam from power. It is almost impossible to get any reliable estimate about how many contractors were injured.

Over the course of a lifetime, minor injuries may lead to profound reductions in quality of life. Explosions and gunfire can lead to head injuries, and veterans report a high incidence of tinnitus. The RAND corporation estimates that around 320,000 people suffered a traumatic brain injury while serving in Iraq, and half of them have never had this examined by a doctor. Our knowledge of the long-term effects of minor traumatic brain injury is limited, but with such a large population exposed, even a small increased risk of long term effects would have a profound public health implication.

War also has a long-term mental health impact on veterans. According to Combat Stress UK, it can take over a decade for people to see a doctor about their combat-related mental illness. RAND estimates that in 2008, 300 000 of the American soldiers who served in Iraq were suffering from post traumatic stress disorder, and suicide rates among veterans are high. The communication and understanding of the health impact of war on all sides is crucial to us in the Health through Peace community. War harms all those who come into contact with it, which is why the militarisation of our society is in direct opposition to efforts to build a healthier world.

We do not feel that this inquiry has done justice to the health impacts of the Iraq War and all its casualties, nor has it adequately responded to our need to prioritize long-term nonviolent solutions to conflict. Dylan Mathews, the CEO of Peace Direct (an international charity dedicated to supporting local peacebuilding) emphasised the need for investment in long term, nonviolent approaches:

“Whilst the long term consequences of this report remain to be seen, the long term consequences of the 2003 invasion of Iraq are clear. The Iraq Body Count estimates that up to 180,000 civilians have died. This is a tragedy of such monumental proportions that no report will ever do justice to the lives lost. At Peace Direct we are clear there urgently needs to be a shift away from militarised approaches and towards long term, nonviolent solutions. War has unfortunately become the norm. We as a community must challenge that and invest in peaceful, locally led solutions to preventing and resolving conflict.”

As members of the health community deeply concerned by the impact of war on health, we urge civil society and politicians to learn from the Iraq War by recognizing our urgent need to invest in constructive and long-term peacebuilding and move away from militarised security. We urge our friends and colleagues working in and concerned about health to join the health through peace movement, which resists militarisation as a driver of ill-health and works to promote peace as an essential prerequisite to a healthier world. 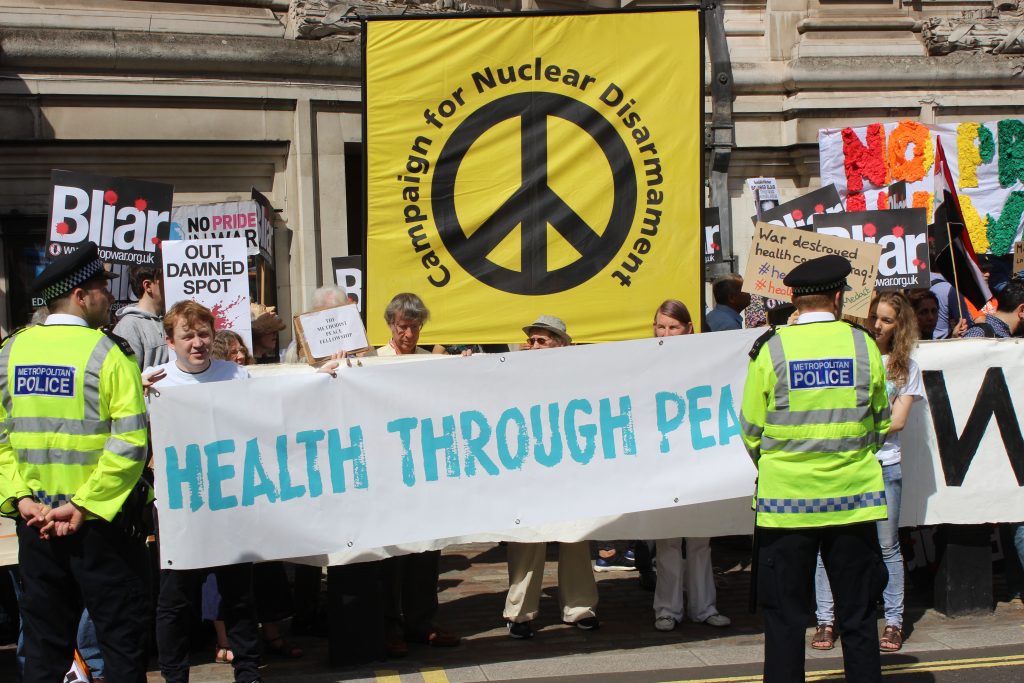 Medact produced a total of 5 reports on the health effects of war in Iraq, which are available here: Health and Health Policy in Iraq

Rhianna Louise
Peace & Security Project Officer at Medact
Rhianna works at Medact on issues related to militarisation, the international arms trade and the refugee crisis; and supporting the growing movement for peace in the health community.