In Defence of the Heathrow 13 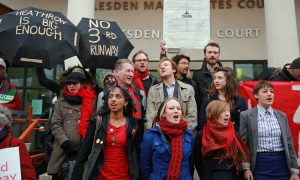 Confronting the Reality of Climate Change, and Challenging the Judgement Against the ‘Heathrow 13’

The recent conviction of thirteen individuals (the ‘Heathrow 13’) for aggravated trespass for blocking one of Heathrow Airport’s two runways in July 2015 has raised discussion about two important public health questions. First, when is it legitimate to break the law to protect human health? Second, how much is climate change and aviation a threat to human health?

The decision to break the law and disrupt air traffic was part of a protest against the recommendation made in the Davies Report to build a third runway at Heathrow. The Heathrow 13 argued that their illegal activities were undertaken to prevent death and harm arising from climate change. This line of defence failed in the eyes of district judge Deborah Wright who concluded that the actions of the Heathrow 13 did not prevent death or harm to anyone, and could therefore not be condoned or excused.

It is well established, however, that fossil fuel combustion and climate change are serious threats to health. Climate change increases the risk of ill health via multiple pathways that include, for example, the effects of extreme heat, extreme weather events, food and water insecurity, altered patterns of disease, ocean acidification, war and conflict, and large scale population displacement.

While it is not possible to quantify with complete precision the current and future impact of climate change on health, conservative scientific models estimate that hundreds of thousands of excess deaths each year are already associated with climate change, and that future climate change has the potential to cause catastrophic harm to human civilisation.

When combined with road traffic to and from airports, flying is also a major source of nitrous oxide (NO2) emissions which, in the Heathrow area, already breach EU air quality standards on a regular basis. Fossil fuel combustion also creates air pollution that is estimated to cause 9,000 excess deaths each year in London, as well as increased levels of respiratory illness.

It is also known that airline emissions are the fastest growing source of carbon emissions; and that greater levels of flying (notwithstanding the potential for cleaner and more fuel efficient technology in the future) are incompatible with the need to prevent global warming from exceeding a 2oC threshold. Furthermore, given that the UK has made a disproportionately large contribution to global greenhouse gas (GHG) concentrations and that the negative impacts of climate change fall disproportionately upon the world’s poorest communities, there are clearly moral and ethical arguments to oppose any expansion of the UK’s airport capacity.

It would be facile to try and attribute the saving of anyone’s life directly to the effects of the Heathrow 13’s actions on disrupting a tiny number of flights. However, it would not be facile to argue that our current and proposed future patterns of fossil fuel combustion are already causing large-scale human harm and that action to highlight the threat of unconstrained aviation is both socially-responsible and scientifically sound. Given the scale of threat posed by climate change and the inability or reluctance of many governments across the world to break decisively from our dependence on the fossil fuel industry, one can also see the logic for conducting acts of civil disobedience and direct action aimed at catalysing meaningful social and political action.

There is a long history of illegal acts of civil disobedience in support of noble and socially progressive goals including giving women the vote, ending apartheid, and abolishing slavery. Illegal acts of civil disobedience were also perpetrated by many health activists in order to draw attention to how corporate profiteering was preventing access to life-saving medicines for millions of people with HIV.

Given what we know about climate change, parallels between the actions of the Heathrow 13 and these other examples of civil disobedience should be drawn and, at the very least, discussed. But in imposing heavy custodial sentences upon the Heathrow 13, district judge Deborah Wright appears to have chosen not to do so. This is regrettable.