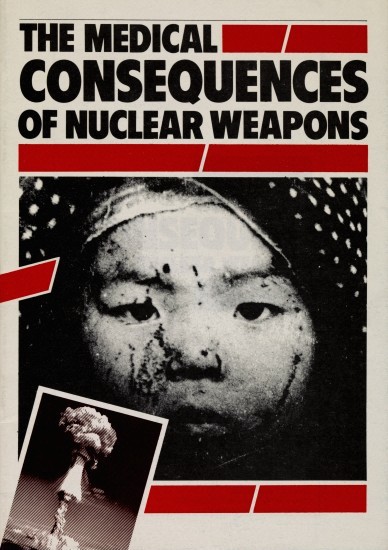 The photograph featured on this booklet, made by Medact’s predecessors (MCANW & MAPW) in 1982, shows a Hiroshima survivor. The photo was taken by Yosuke Yamahata, who himself became a victim of the bomb 20 years later when he died from cancer probably caused by the residual effects of the bombing. These photos were banned from publication by the Allies until 1952. The booklet described the medical consequences of the effects of blast, heat and ionizing radiation from nuclear weapons, including details from the Hiroshima and Nagasaki atomic bombings. It concluded that if for no other than purely medical reasons, nuclear warfare must never be allowed to happen.

On the 6th August 1945, 70,000 people in Hiroshima were killed almost instantly by the Atom bomb. Another 70,000 were fatally injured. Local hospitals were destroyed and their medical and nursing staff killed. The atrocity was repeated in Nagasaki three days later. The bombings at Hiroshima and Nagasaki added 250,000 to the 20 million already killed in WW2.

Yet 16,400 nuclear weapons remain, of which at least 1,800 are deployed (ready for action) and targeted on major world cities and installations. Most modern nuclear weapons are many times more powerful than those dropped on Japan in 1945: the detonation of just a few dozen could obscure sunlight for many years, and the following famine would starve billions of people to death. Nuclear terrorism is an acknowledged danger, with non-state militant groups having also declared their intent to get ‘the bomb’.

In times of increasing global insecurity, where the principle of ‘Mutually Assured Destruction’ is becoming more obviously mad, Medact needs to ramp up its work on the prevention of war and weapons proliferation.

This year, Medact’s Hiroshima Appeal is tied to the explicit aim of renewing and building up the medical and health peace movement in the UK. Perhaps because of the end of the Cold War, combined and the fact that the UK has been mostly spared from the direct effects of war for nearly seven decades, interest in and commitment to a peace agenda amongst health professionals has waned.

But there is no justification for this. War and conflict (nuclear or otherwise), catalysed by a corrupt and self-serving arms industry and encouraged by a culture of militarism, are major threats to human health and even human civilisation. And the events that continue to unfold in Iraq, Syria, Ukraine and Palestine continue to make demands on civil society in the UK to press the government here to adopt policies that will serve peace and international stability, rather than the opposite.

With your support, we will build a new, younger, bigger and re-energised movement for peace amongst health workers.

Visit the appeal page to find out more and give your support.