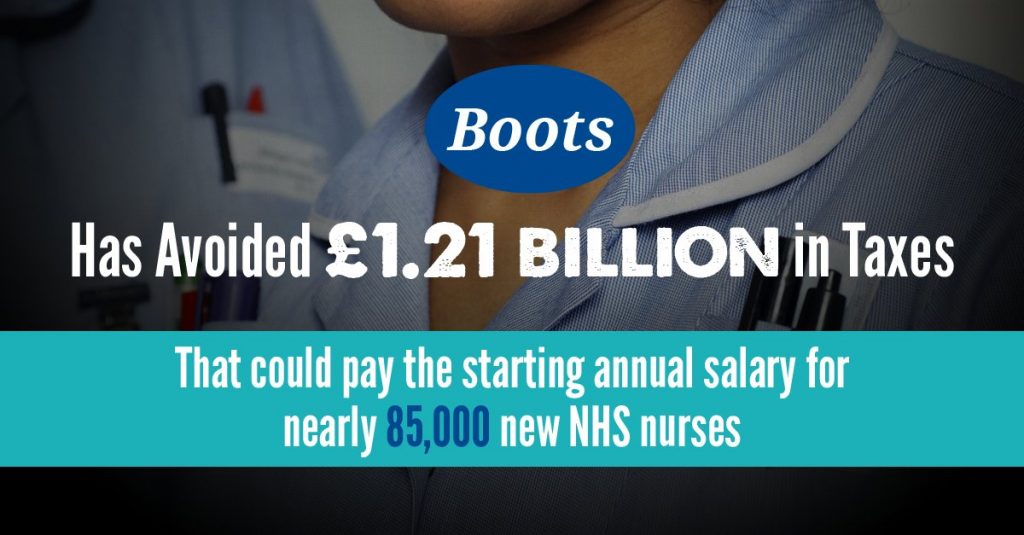 Tax abuse costs the UK economy £69.9 Billion a year – more than half of the country’s total annual healthcare spend.

Meanwhile, health and social care services are being slashed in the name of austerity and affordability.

Tax avoidance and evasion are extremely common and many transnational corporations avoid paying tax in ways that may be legal, but which are clearly unethical and wrong

One of these is the parent company of the UK’s well-known high-street pharmacy: Alliance Boots.

One study estimates that the tax illegitimately avoided by Alliance Boots since 2007 amounts to £1.21 billion – enough to pay for 85,000 new nurses for one year, or to cover the prescription charges for the whole of England for almost three years. At the same time, Boots is expanding its service contracts in the NHS. There is something not right about companies like Boots profiting from the NHS whilst contributing to the country’s public deficit through tax avoidance. 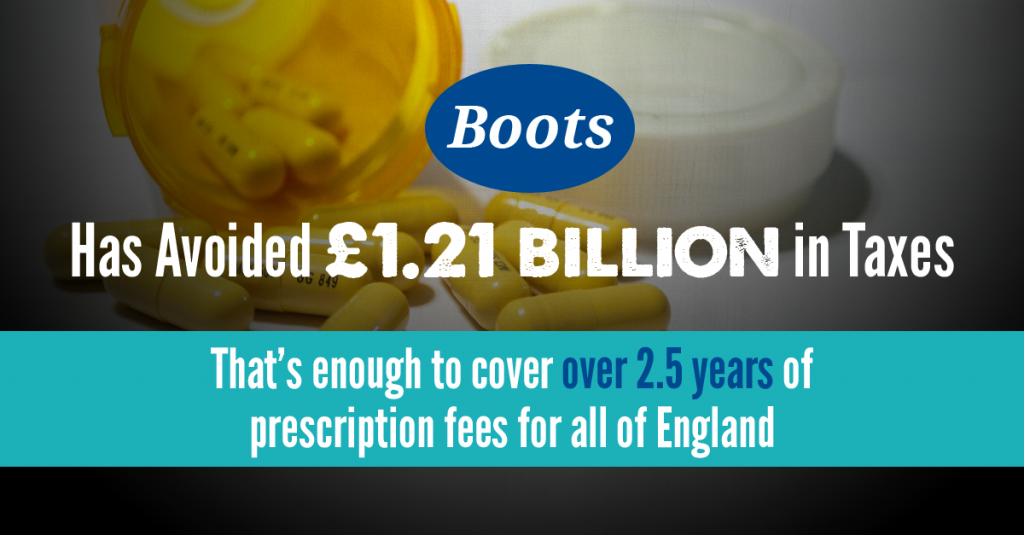 Although Alliance Boots is not alone in practising legal but illegitimate tax avoidance, it does provide a good case study of how the NHS is simultaneously being starved of finance whilst being turned into a cash cow for profit-hungry firms.

But there are other reasons for health professionals to be concerned about Boots. Far from the friendly high street chemist we would like to it be, since its amalgamation into a multinational conglomerate, it appears that the ethos of Boots has shifted to focusing on profit generation – at the cost of customer health, safety and satisfaction.

Symptoms of this contamination by business logic include decisions to insist on selling products of questionable safety and heavy-handed labour practices affecting its staff.

In other words, Boots also provides a good case study of the corporatisation and commercialisation of health care. Even if we want the pharmacy retail sector to be left predominantly in the private sector, we want it to function as a proper and fair market. Not one which short-changes both professional pharmacists and the general public.

Boots the Chemist was founded in 1849 in Nottingham and has long been an icon of the British high street. In 2006, however, Boots merged with European pharmacy wholesaler Alliance Unichem Plc. to form Alliance Boots. Alliance Boots receives an estimated 40% of its UK revenue  – £4bn – directly and indirectly from the NHS through dispensing and related services. It operates pharmacy retail, wholesale, generic manufacturing and clinical homecare businesses. It is also the largest community pharmacy chain in the UK – nearly 2,400 pharmacies trade under the Boots banner. Alliance Boots is the largest single employer of pharmacists and pharmacy technicians outside the NHS. Outside the UK, Alliance Boots is primarily a pharmacy wholesaler—the biggest in Europe. And the corporation plans to expand its retail footprint to other healthcare services, including: medicine check-ups, weight management programmes, smoking cessation advice and flu vaccinations..

What are we doing?

Medact believes that everyone should pay their fair share of tax – including corporations.

That’s why we are campaigning with Unite, Change to Win and War on Want to make the avoidance of tax a public health issue. Exposing the abusive tax practices of corporations – particularly health providers – will encourage them to change their practices. But this is part of a broader programme of work designed to promote economic justice as a fundamental determinant of good health.

Other actions we will be taking include:

Tax abuse is bad for our health – and we can’t let companies like Boots get away it.

Alliance Boots went private in 2007 in a £12 billion leveraged buyout led by executive chairman Stefano Pessina and US private equity firm Kohlberg Kravis Roberts (KKR), relocating the once-British firm to Zug, Switzerland – a tax haven. In 2012, Walgreens, the largest pharmacy chain in the US, bought a 45% stake in the company – with an option to buy the remaining 55% in 2015. Alliance Boots has significantly reduced its tax expenses since going private, avoiding an estimated £1.21 billion in tax over six years, and Stefano Pessina may have personally made millions from offshore transactions.

But while the company bosses get richer through dishonest tax practices, this surplus is not trickling down to the workers at the bottom. For example, Alliance Healthcare (Alliance Boots’ wholesale operation), announced in November 2013 that it expects to cut more than 100 positions  across the distribution network as a result of “tough market challenges.”

The Pharmacists Defence Association Union (PDAU) reports that pharmacists working for Boots have been under increasing pressure to reach management targets, often at the expense of time spent on patient consultations, leading to diminished customer and professional satisfaction. Sadly, where pharmacists have tried to improve their working conditions and professional standards by gaining independent representation, their efforts have been strongly opposed by Boots.

Boots gives further cause for concern in its recent decision to insist on selling e-cigarettes by Fontem Ventures – a subsidiary of Imperial Tobacco – despite warnings from the Royal Pharmaceutical Society (RPS) about the potential for harm due to the lack of safety, quality or efficacy standards.

With the company set to further widen its influence by seeking opportunities to develop new healthcare services through the Any Qualified Provider (AQP) contract model, Medact is worried that the actions of Boots will have a negative impact on the ordinary customer. Boots maybe one of the UK’s oldest and most trusted high street brands, but its recent practices threaten its special position in the hearts and mind of the British public.