Our friends at Musicians for Peace and Disarmament are holding an online concert with legendary activists and folk singers, as well as a great lineup of performers from across the UK. The event is free but all donations support organisations working in the peace movement.

Frankie Armstrong has sung professionally in the folk scene and the women’s’ and the peace movements since the 1960s. She has made 12 solo albums, as well as featuring on numerous shared and themed recordings. She is founder and President of the Natural Voice Network and an honorary member of the Voice and Speech Trainers Association (VASTA) of North America, and was awarded the Gold Badge in 2018 by the English Folk Dance and Song Society. frankiearmstrong.uk

Trained in both classical and folk music, her experience spans 55 years of performing, travel and songwriting and is best known as singer of traditional Anglo-American songs and activist songmaker. She has recorded 23 solo albums and participated directly in more than a hundred others. peggyseeger.com

Davies and Daughters are a family female acapella trio singing songs from the British and European folk traditions in their own unique harmony arrangements, as well as original songs. They sing in folk clubs, festivals, climate emergency events and recently at peace vigils for Ukraine.

Boff Whalley and The Commoners Choir

A remarkable community choir from Leeds tackling social injustice in all its forms. The choir’s founder, Boff Whalley is a musician and writer, former lead guitarist of Chumbawamba and currently working on a project with Welsh National Opera. Boff is founder of Chumbawamba. boffwhalley.com | chumba.com 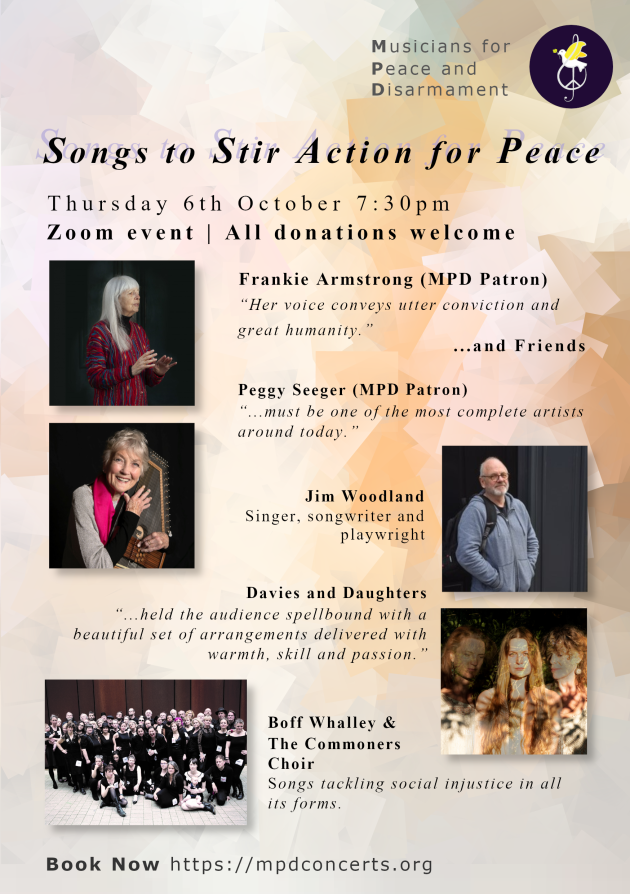