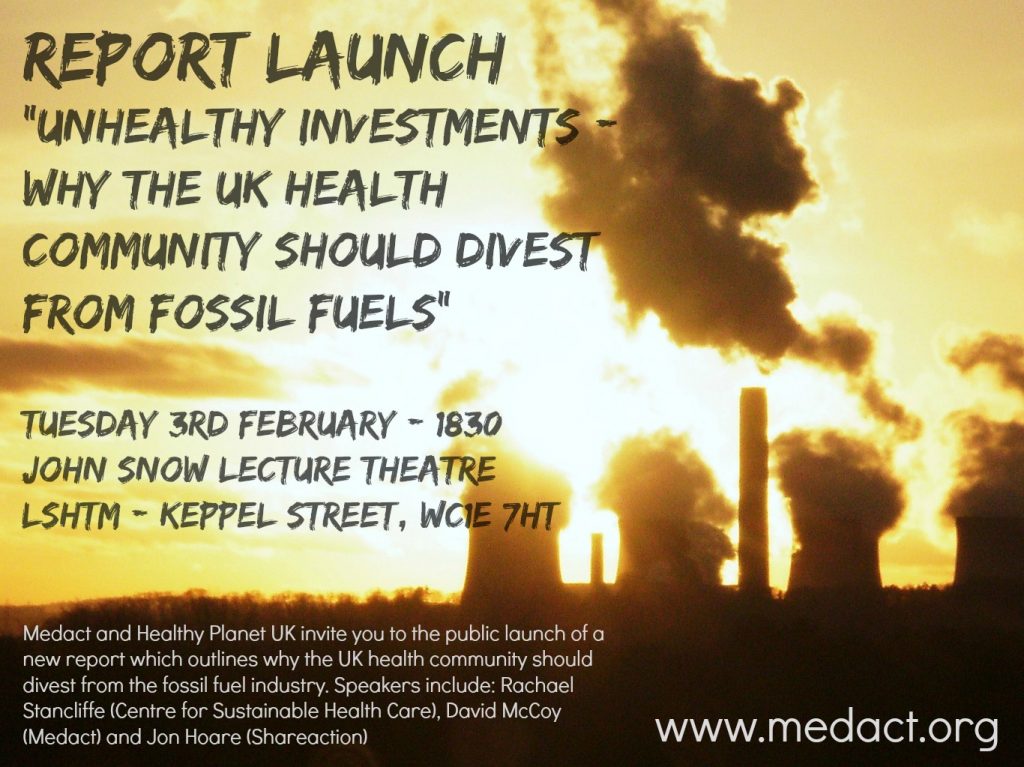 This event is taking place to mark the public release of a report about the case for divestment from fossil fuels by the UK health community, including representative bodies such as the medical and nursing Royal Colleges, academic institutions working on healthcare or public health, and health-focused charities and foundations, such as the Wellcome Trust.  The report is being published by a group of UK-based health organisations including Healthy Planet UK, Medact and the Climate and Health Council.   It will bring together a panel of expert speakers to discuss the question of whether other organisations which work to improve health should continue to invest in fossil fuel extraction and production companies, focusing particularly on the UK, given the health impacts of air pollution from fossil fuels and the rising threats to health from climate changes The report’s publication is topical, coming after the decision by the British Medical Association in the summer of 2014 to end its investments in fossil fuels and with ongoing discussions about this question taking place in many other organisations, including various health bodies.  The event is also taking place shortly before the Global Divestment Day on February 14th. Only recently, academics at UCL analysed which existing reserves cannot be burned in order to prevent dangerous climate change, finding that 82% of coal reserves, for example, must stay in the ground up to 2050 if this target is to be met.  What is even less well-known is that the transition to clean energy which this requires has the potential to have immense benefits for public health, as well as creating significant economic savings through reduced healthcare costs. These complex and topical issues will be examined from several perspectives, including public health, climate science, healthcare sustainability, finance and socially responsible investment.  You are invited to join us for what promises to be a lively and informative evening, which we hope will inspire you to raise this question with your own representative body or organisation and give you a clear insight into the arguments both for and against health organisations continuing to invest in fossil fuel companies. Confirmed speakers include:

The panel will be introduced and chaired by Dr. David McCoy, Director of Medact.  A Q&A with the audience will be followed by short calls to action from Dr. Hugh Grant-Peterkin, NHS psychiatrist with an interest in sustainability, who also stood as local councillor in London, and a student at the London School of Hygiene and Tropical Medicine who is currently coordinating a campaign for the University to end its investments in fossil fuels.