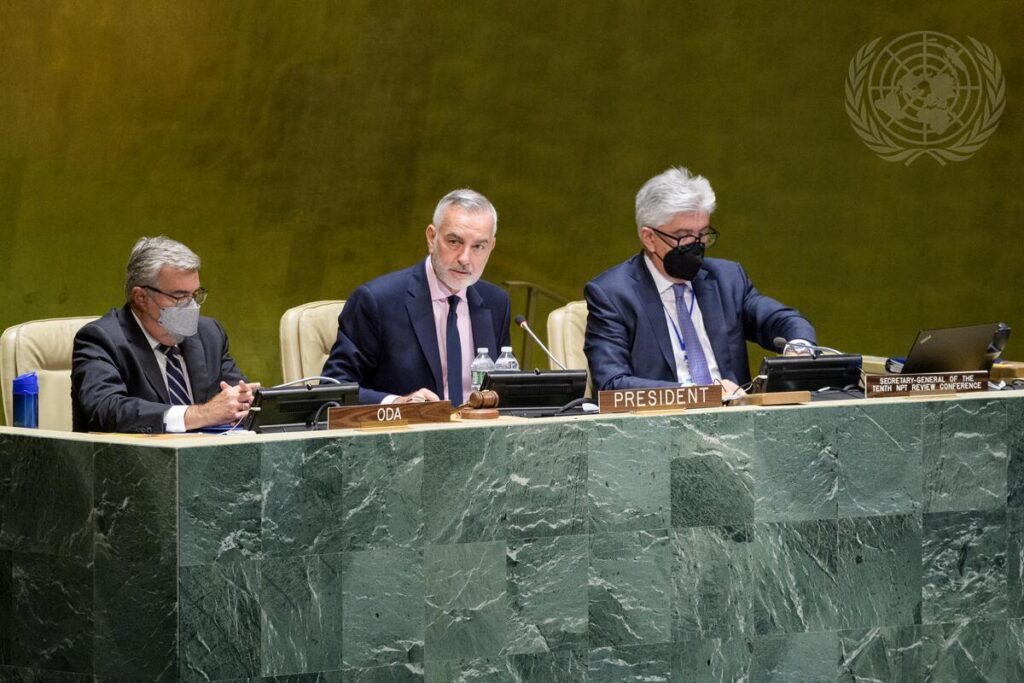 Last week, at the 10th Nuclear Non-Proliferation Treaty Review Conference, and after two years’ delay, its states-parties failed to reach consensus on the conference’s outcomes.

The United Nations’ Treaty on the Non-Proliferation of Nuclear Weapons was signed in 1968 after ratification by 46 Nations, including its sponsors, the USA, USSR and the UK. It seeks to limit the spread of nuclear weapons beyond the five States it officially recognises as Nuclear Weapons States – China, France, Russia, US and the UK. It has now been ratified by 190 UN Member States (the ‘states-parties) although (notably) India, Israel and Pakistan never ratified it and subsequently developed their own nuclear arsenals, as did North Korea after withdrawing from it in 2003. Crucially, the five Nuclear Weapons States recognised – the only permanent and veto-carrying members of the UN Security Council: this has profound consequences for progressing the treaty’s aims for nuclear disarmament.

Context: What is the Non-Proliferation Treaty?

The Non-Proliferation Treaty is essentially a bargain between the recognised Nuclear Weapons States and the states not possessing nuclear weapons. Its three ‘Pillars’ are:

Of its sub-clauses, Article VI requires each party to “undertake to pursue negotiations in good faith on effective measures relating to cessation of the nuclear arms race at an early date and to nuclear disarmament, and on a Treaty on general and complete disarmament under strict and effective international control”. But none of the Nuclear Weapons States have acted adequately on their required ‘good faith’, so widespread disillusion has led to a new treaty – the Treaty on the Prohibition of Nuclear Weapons, or the Nuclear Ban Treaty – which offers a pragmatic solution to the threats posed by nuclear war on all humanity: it was ratified in January 2021 and now has 66 state-parties, all of which are non-nuclear-weapon states.

The states-parties to the Non-Proliferation Treaty agreed from the outset to hold Review Conferences every five years to review progress, but the Covid-19 pandemic interrupted this sequence and the Review Conference intended for 2020 was eventually held in July–August 2022.

Each Review Conference is meant to conclude with an agreed Outcome Document which although representing the ‘lowest common denominator’ has usually been a useful marker of any progress toward nuclear disarmament. But not in 2022…

For only the second time in its history, the parties failed to reach a consensus on an Outcome Document with concrete measures to prevent nuclear war or make any progress on nuclear disarmament. Although the Ukraine crisis was, inevitably, discussed extensively during the conference, this was by no means the only issue. The International Campaign Against Nuclear Weapons has pointed out that all 66 States ratifying the alternative Nuclear Ban Treaty unequivocally condemned nuclear threats by adopting the Vienna Declaration, and Cesar Jaramillo of Project Ploughshares described Review Conference 2022 as a ‘Colossal Failure’. Although this failure was largely attributed to Russian objections to the draft Outcome Document’s otherwise universal consensus (which did refer to Ukraine), Jaramillo added that – far more significantly – even decades after the end of the Cold War, all the Nuclear Weapons States continued to insist that undertaking disarmament measures was ‘premature’, and with each backing-up statement, they lost credibility. The Cuban delegate denounced the weak political will for nuclear disarmament expressed in the final draft while other states acknowledged that they were signing mainly to preserve the treaty regime.

Nevertheless, Ukraine did feature heavily at RevCon 2022, especially the situation at the Zaporizhzhia nuclear power plant for which most delegates blamed Russia. But attempts to mollify Russia failed to stop it from rejecting the proposed final draft which, by referring to ‘Ukraine’s international borders’, crossed Russia’s ‘red lines’. Although other Nuclear Weapons States had ‘red lines’ of their own, they might not have applied them; but, as Jaramillo comments, the Outcome Document would still have had no serious commitments to change policies.

NATO was seen by Russia and China to be particularly challenging as NATO’s many non-nuclear-weapon states have an interest in maintaining the ‘nuclear deterrent’. Indeed, the  Nuclear Weapons States repeated their claims that the new Nuclear Ban Treaty undermines the Non-Proliferation Treaty. As pointed out elsewhere, Russian action in Ukraine has actually done more to undermine it: several non-nuclear-weapon states note with interest that Russia’s nuclear weapons have allowed it to threaten their ‘tactical’ use (which Russian authorities seem not to recognise as incompatible with their treaty obligations).

Nevertheless, the lack of an agreed Outcome Document does not mean that this year’s Review Conference was valueless: Jaramillo comments that it was a ‘positive measure of the ongoing commitment of the States Parties and the objectives embodied’ by the Non-Proliferation Treaty. The increasing demand for concrete disarmament shows that this fundamental shortcoming has to be addressed with increasing urgency. RevCon 2022 also ‘displayed a renewed emphasis on gender and the important role that women can and must play in nuclear abolition at every level of disarmament discussions. He concludes ‘The fundamental point of division at RevCon 2022 was never the Ukraine conflict. Rather, the essential divide was that non-nuclear-weapon states want a credible path to nuclear disarmament with concrete commitments and good-faith implementation, while Nuclear Weapons States want to maintain the status quo.’

As health workers affiliated to the International Physicians for the Prevention of Nuclear War and committed to nuclear abolition, Medact must continue to challenge this ‘status quo’ and contribute support for a better outcome at Review Conference 2026.

Will you make a donation to Medact so that we can keep building the health movement to end war and nuclear weapons? There’s still time to donate to this year’s Hiroshima Appeal!