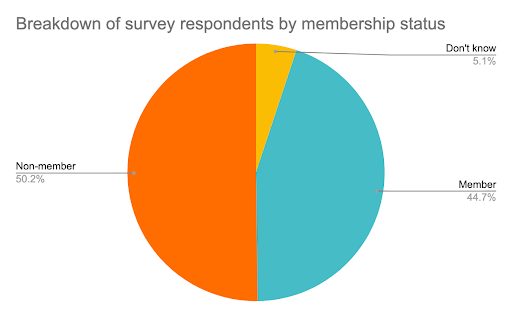 While we attempted to get input from a broad range of people involved in our work, the results of the survey do not represent the views of everyone in the Medact movement. That being said, we found the results interesting and we hope that you do, too!

Of the 292 people who responded, the vast majority of current members told us that they support our membership model, which requires members to give a regular contribution starting at £1 per month. Just under half of current non-members expressed support for our current model.

The majority of people said that they thought £1 a month was a reasonable minimum donation, with £5 a month being the next most popular choice.

We asked members why they joined Medact. 86% said they joined because they think it is important to support Medact financially. This reflects the findings of the previous question, demonstrating that members feel strongly about giving financial support. The other highest rated reasons were to “support Medact’s work in general” and to “be in community with health workers who want to create a safer, fairer, better world”.

We asked non-members why they have not joined. 39% said they didn’t realise membership worked as a financial model and 39% said they could not afford membership at this time. We don’t know how many of the respondents are aware that you can join for as little as £1 a month, so it is difficult to draw a conclusion from this data. However, this does demonstrate that there is a substantial lack of knowledge about how our current membership model works, and perhaps also that it is accessible at a low entry point.

We do think this provides strong evidence for keeping free access to participation and ensuring that anyone can be involved with our work without being a paid member of Medact, and the need for improved messaging around membership to bring clarity to our structure.

We wanted to know how people felt about replacing our current model of membership with one based around shared values without a membership fee. There were fairly similar results from both members and non-members, but more members than non-members do not support this change. However, there was also a significant amount of uncertainty—most likely from lack of clarity around what this would look like or mean—which might temper any conclusions. 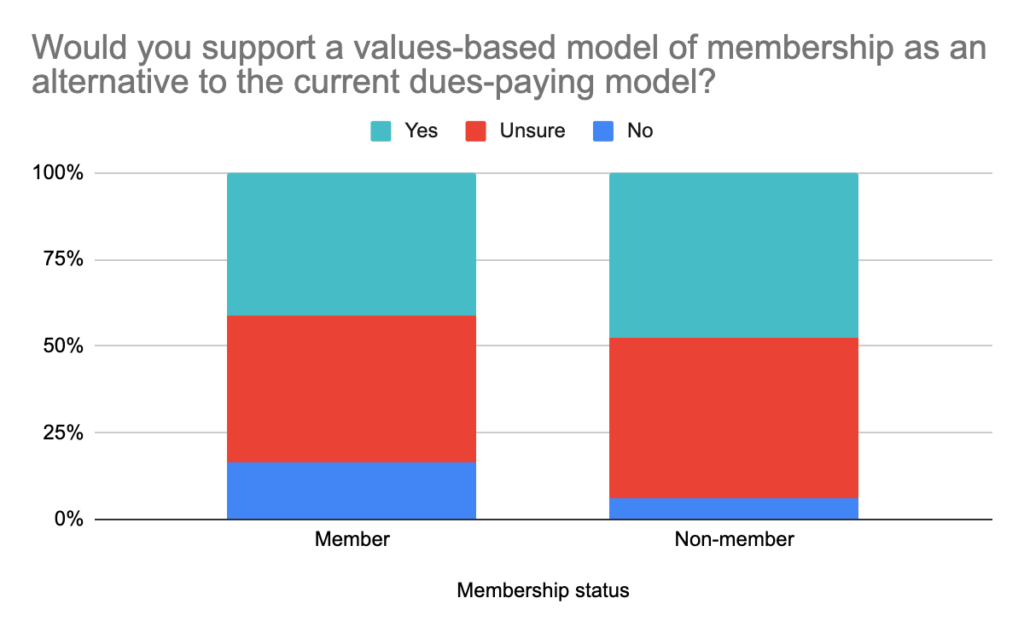 We asked people if they support the introduction of a values agreement to participation in the Medact movement. We saw similar results from members, non-members, and those unsure of membership status. Of the people who participated in the survey, there is majority support for the introduction of a values agreement from members. non-members and those uncertain of their status. Whether we wish to extrapolate this to the broader movement is uncertain and requires further research!

We also asked people to tell us which values, from a list, they thought were central to our movement, and share their own values if unlisted. We were interested in learning here the key values people identify as central to the work that Medact does, which may inform future research into a potential values statement.

The top five values are:

Some of the other values shared were:

We asked participants to share some demographic information, but this was not required to complete the survey. We asked this because:

We think it is important to be transparent about the demographics of those who participated in this survey, because beliefs, behaviours and choices are influenced, to varying extents, by aspects of personal identity and experience.

We don’t think that the demographic data we have is a big enough sample size to draw any meaningful conclusions from.

Based on the survey results and other factors, we do not intend to change our membership model for now. Membership will continue to function as it currently does, and involvement in Medact’s work—aside from voting at the AGM and running to be a board member, which are reserved for members—will not require a financial contribution. There is clear support for the introduction of some kind of values agreement as one element to being involved in our work, the content and structure of which will need to be created in consultation and collaboration with the Medact movement and Board of Trustees.

We will present a summary of this data at the 2022 AGM on October 29th. We will continue to explore the introduction of some sort of values agreement, which will entail more research and engagement with the movement—including reaching those in our movement who we haven’t heard from and may be underrepresented in the results so far. We may include this survey as part of our email journey for new members and new subscribers in order to continue gathering data.

If you’d like to discuss any element of this survey or its results, please email us at [email protected] 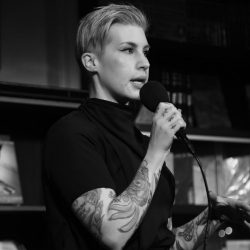 Find out more on our People page

Latest posts by Rosie (see all)