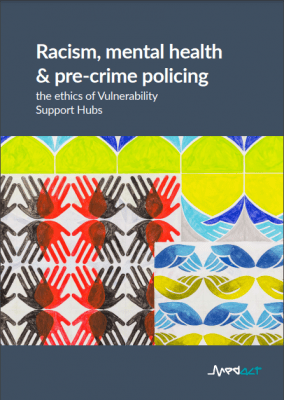 Our latest report, Racism, mental health & pre-crime policing: the ethics of Vulnerability Support Hubs, exposes a secretive counterterrorism police-led mental health project called  ‘Vulnerability Support Hubs’. Thousands of individuals suspected of potential ‘extremism’ – a vague and racialised term which the government itself has tried and failed to legally define – have been assessed by the hubs, in which mental health professionals collude with counterterrorism police officers.

Based on documents obtained through a series of long-running Freedom of Information requests, our report shows how the hubs blur the boundaries between security and care. It raises the following ethical concerns:

Online launch: Report co-authors Dr Hilary Aked, Dr Tarek Younis and Dr Charlotte Heath-Kelly will discuss the report alongside Vicki Nash – Head of Policy, Campaigns and Public Affairs at mental health charity Mind – at our online launch event on Weds 19 May at 7pm.
Register for the launch event Weds 19 May at 7pm
Read the original data: In the interests of transparency and enabling public scrutiny, we are publishing the 2017 hub evaluation documents on which this report is based, which we have combined into one PDF document.
Download the original documents [PDF]
For updates on our ongoing work on this area, please sign up to our mailing list below: