Coronavirus and the politics of far-right nationalism in India

India had its first case of coronavirus at the end of January 2020, but until mid-March the government appeared to be unconcerned, with its attention instead focussed on preparing for Donald Trump’s state visit. 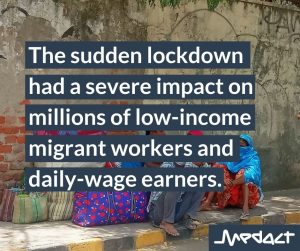 Then on 24th of March the government suddenly sprung into action and imposed an almost total lockdown with only four hours notice. It was followed by announcements from Prime Minister Narendra Modi urging people to light lamps and bang utensils to thank health workers, which some politicians from the ruling BJP party proclaimed would also scare away the virus. Whilst the government did introduce social distancing recommendations, they were overshadowed by these more dramatic announcements and undermined by spurious public health claims made by BJP politicians.

During the sudden lockdown, all forms of transport were halted, which had a severe impact on millions of low-income migrant workers and daily-wage earners. With no work, nowhere to live, no savings, and little guidance or financial help from the government, these workers and their families found themselves forced to walk hundreds of miles to their home villages. Facing police harassment and lack of food and water, many lost their lives on that long journey.

The social impact of the pandemic cannot, however, be fully understood without a look at the nature of the Bharatiya Janata Party (BJP) which has ruled India since 2014. 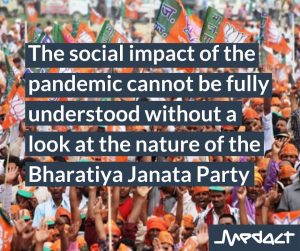 The BJP is the political wing of a so-called ‘family of organisations’ which includes both an ideological parent organisation, the Rashtriya Swayamsevak Sangh (RSS), and a host of paramilitary outfits. Its stated aim is to turn India, a secular democracy, into a Hindu state which combines Hindu supremacy with a neoliberal economic approach based on unregulated, free-market capitalism.

Since the BJP came to power in 2014, there has been a resurgence in violent Islamophobia. Between 2016 and 2019 alone, 44 people, most of whom were Muslims, were lynched by state-sponsored ‘cow-vigilante’ mobs who accused them, often without any evidence, of offending Hindu traditions by eating or killing cows.

The violence has been encouraged by a flood of misinformation on the internet, but the actions of the Indian government have helped normalise Islamophobia.

Recent legislative and constitutional changes have raised fears that the government is attempting to re-define citizenship along religious lines and disenfranchise India’s Muslim population. In December 2019, the government passed the Citizenship Amendment Act (CAA) which divided refugees into Muslim and non-Muslim categories and only offered paths to citizenship for the latter. This was introduced after the government had already brought a National Register of Citizens into place which was designed to recognise and expel Muslims under the pretext that they were illegal immigrants.

Following the introduction of the CAA a massive country-wide protest movement swept through India, condemning the legislation as Islamophobic and in contravention of India’s secular constitution. At the heart of the protests was a unique, peaceful occupation of public space by Muslim women in Delhi. However, the occupation was constantly threatened by armed mobs linked to the ruling BJP party. Then on the 27th February 2020, while the Indian media was preoccupied covering Donald Trump’s visit, these vigilante groups perpetrated what can only be described as a pogrom against Delhi’s Muslim community. 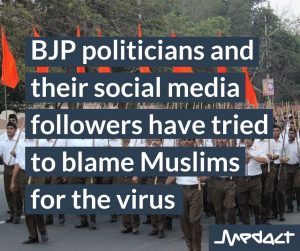 Soon after, under the cover of lockdown, the police began to arrest Muslims, including many who had been victims of the Delhi attacks. The police detained dozens of students, feminists, academics, and others whose only ‘crime’ had been to protest peacefully. These political prisoners, charged under draconian colonial-era sedition and anti-terrorism laws, remain in prison to this day and have been denied bail, including those who are elderly, infirm or suffering from chronic vulnerable illnesses.

At the same time as this political repression, BJP politicians and their social media followers have tried to blame Muslims for the virus. In one high profile incident they accused a gathering of the Muslim Tablighi Jamat organisation, which took place before the lockdown, of being responsible for the spread of coronavirus in the country, and this resulted in the hashtag #CoronaJihad trending on Twitter. Meanwhile, far larger Hindu gatherings with no social distancing have continued to take place across the country, without scrutiny. 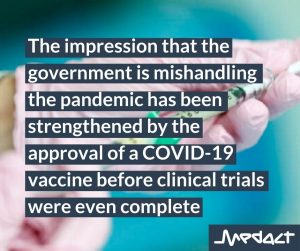 Since September, India has become the country with the second highest number of coronavirus cases in the world, but despite this, the government has tried to carry on with business as usual. Instead of focussing on the public health response to the pandemic, they have passed laws to deregulate the agriculture industry, which it is feared will exacerbate poverty and landlessness in farming communities. Furthermore they have pressed ahead with a two-year long project to build an opulent new Parliament building. The impression that the government is mishandling the pandemic and focussing energy on other political objectives has only been strengthened by the recent approval of a COVID-19 vaccine before clinical trials were even complete.

While the pandemic continues to rage, Prime Minister Modi is making it crystal clear that his government does not prioritise the health or wellbeing of its citizens. Instead of COVID-19 being an impetus to strengthen the country’s health systems, it has been mismanaged and used as an excuse to further marginalise India’s Muslims and to clamp down upon political opposition.

The author of this blog is a Consultant doctor who has worked in the NHS for the last 10 years. He is a member of South Asia Solidarity Group (SASG) which is an anti-imperialist, anti-racist organisation based in Britain, committed to supporting, publicising, and building solidarity with people’s struggles for justice and democracy in the countries of South Asia.