The Royal College of Psychiatrists has today announced that it is divesting from coal, oil and gas companies. The College’s multi-million-pound investment portfolio will go free of fossil fuels with immediate effect.

The announcement comes after some impactful campaigning by the “Fossil Free Psych” campaign group. The group, which is composed of health workers and members of the Royal College of Psychiatrists, worked with Medact to encourage the College to cut ties with the fossil fuel industry.

“We are delighted that our College has made this decision to divest from fossil fuels, given the profound impacts of climate change and air pollution on mental health.

We believe it is unethical and unacceptable for any organisation that aims to improve health to be invested in this industry.

We would urge health workers to work with organisations like Medact to make sure their professional bodies go free from fossil fuels without delay.” 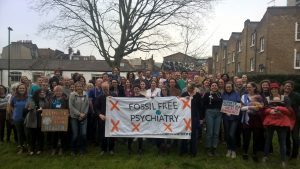 “The climate crisis demonstrates the profound impact that our environment (and its degradation) has on our mental wellbeing.”

“Fossil fuels are the major contributing factor to air pollution which is having a devastating effect on children’s brain development. There are strong associations with both cognitive impairment and neurodevelopmental disorders. Divesting from fossil fuels is an essential public health intervention.”

Fossil Free Psych campaigners are particularly concerned about climate impacts that children are facing. Child and Adolescent Psychiatrist, Dr Catriona Mellor, who is also a parent, pointed out that:

“Greenhouse gas emissions are driving us towards a future that looks terrifyingly bleak, with children’s mental health
and well-being a major casualty. However there is enormous opportunity for a healthier, happier future and actions like fossil fuel divestment are paving the way. Child and adolescent mental health professionals have an important role to play in the next steps of this
alternative vision. We need to hear and validate the concerns being raised by children across the world, support their agency and engagement while also stepping up to the task of mitigation and adaptation ourselves”

The number of health organisations that are cutting ties with the fossil fuel industry is growing rapidly. In the UK, divestment commitments have been made by the Royal College of General Practitioners, Royal College of Physicians, Royal College of Emergency Medicine, Faculty of Public Health and the British Psychological Society. Fossil fuel divestment is essential in the lead up to CoP 26 climate talks which will be held in Glasgow in November. The UK government must also end its scandalous support for the fossil fuel industry if it is to have any chance of acting as a credible host for the talks. Commenting on this, Medact’s climate campaigner, Dr Deirdre Duff said:

“The UK should not be hosting international climate talks while it continues to support fossil fuel companies that are fuelling a public health emergency and pushing false solutions like carbon markets and unproven negative emissions technologies.”

“Oil and gas companies, fuelled by UK finance, carry out their most damaging projects in the global South, against the wishes of local communities, with devastating mental and physical health impacts. Climate justice demands that we stand with these communities, who are resisting fossil fuel extraction on the frontlines and leading the global struggle against climate breakdown.”

Fossil fuel companies like Shell and BP have a history of attending UNFCCC climate talks, where they frustrate progress and promote false climate solutions. Medact will be calling for a Fossil Free CoP26, asking that fossil fuel companies be excluded from playing any role in the Glasgow talks.