Since the onset of the coronavirus epidemic in the UK, there has been little public and political discussion of the situation for those held in British detention settings ─ including prisons, young offenders’ institutions, secure training settings and immigration detention centres.

Prisoners and detainees are often overlooked in discussions about public health and health inequalities, despite the UK’s coronavirus outbreak’s detrimental impact on their well-being.

A hidden health crisis in prisons 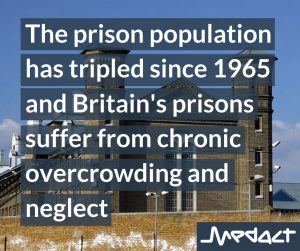 The prison population has tripled since 1965 and Britain’s prisons suffer from chronic overcrowding and neglect. The Ministry of Justice’s own definition of safety and decency stipulates that the prison estate should not hold more than 74,954 people, but there are currently over 8,000 people held above this level. The National Audit Office’s findings earlier this year revealed that 40% of prisons were rated as poor or “not sufficiently good” with health safety problems being widespread.  Worryingly, many deaths in prison that have been categorised by the Ministry of Justice as a result of ‘natural causes’ may have been preventable, and a result of lapsed or inadequate healthcare, a recent report by Inquest found.

The arrival of COVID-19 has only worsened these risks, but the lack of publicly available data makes it difficult to evidence whether these pre-existing problems have been compounded during the pandemic. On 15th May, the Government announced that 437 prisoners had tested positive for coronavirus ─ but Public Health England have admitted that the true total could be six times higher due to the low availability of testing, which has been prioritised for prison staff over inmates.

The Ministry of Justice’s approach to containing the virus has overwhelmingly relied upon increasingly stringent restrictions on prisoners, including a suspension of prison visits across the UK until further notice and a regime that only allows prisoners less than an hour outside of their cell each day. In some cases, prisoners displaying symptoms of coronavirus have not been permitted to leave their cells for a shower or any exercise for up to 14 days. 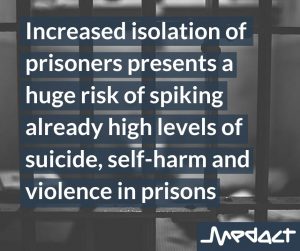 While these measures may have helped limit the spread of the virus in prisons so far, they are also incredibly dangerous to prisoners’ health and wellbeing. Increased isolation of prisoners presents a huge risk of spiking already high levels of suicide, self-harm and violence in prisons. As our Peace and Security Campaigner outlined writing for Open Democracy, people with mental health problems are disproportionately likely to come into contact with the criminal justice system and these mental health problems often deteriorate during incarceration.

In May, five suicides were recorded in prisons in England and Wales in just six days ─ compared to an average rate of fewer than two such deaths a week in 2019. This alarming increase prompted the Shadow Justice Minister to question whether the social isolation measures enforced in prisons were becoming a threat to the welfare of prisoners. Civil society organisations have renewed calls to end indefinite solitary confinement of prisoners and look towards reducing prison populations instead. 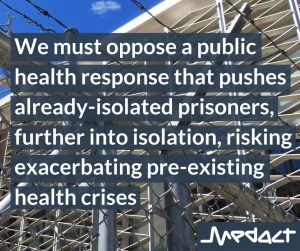 We must question why our criminal justice system imprisons a disproportionate number of people with mental health problems instead of offering them care and diverting them to effective treatment in the community. Similarly, we must interrogate racial discrimination at the heart our criminal justice system which results in black people representing 12% of people in prison, despite making up only 3% of the UK’s population. Considering these inequalities, we must oppose a public health response that pushes already-isolated prisoners, further into isolation, risking exacerbating pre-existing health crises . As the prison abolitionist and anti-racist activist Angela Davis has said: “Prisons do not disappear social problems, they disappear human beings. Homelessness, unemployment, drug addiction, mental illness, and illiteracy are only a few of the problems that disappear from public view when the human beings contending with them are relegated to cages.” 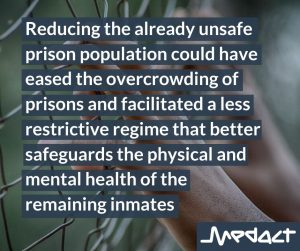 The government has been reluctant to accept that physical distancing is often impossible in sites of detention without a grievous infringement upon the human rights and psychological well-being of prisoners. However, this realisation informed the swift implementation of prisoner release plans in other parts of the world. Ireland, Iran, Bahrain and several US states offer a blueprint for how this could have been incorporated into a broader public health strategy.

In fact, in April, the government seemed to acknowledge that some form of prison release was needed, announcing plans to temporarily release 4000 low-risk offenders, 50 pregnant women and 1,200 vulnerable prisoners. However, at the end of May, only 79 people had been released under the temporary release scheme; only 22 pregnant women freed and less than 10 vulnerable prisoners released.

Reducing the already unsafe prison population could have eased the overcrowding of prisons and facilitated a less restrictive regime that better safeguards the physical and mental health of the remaining inmates. An open letter co-ordinated by Inquest and Women in Prison calling on the Government to immediately reduce the number of people in detention settings has so far gone unanswered. 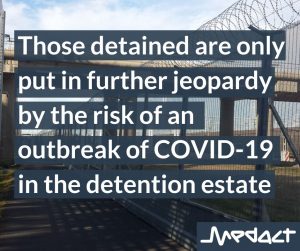 Immigration detention centres, like prisons, already posed a great health risk to those detained prior to the COVID-19 pandemic. Medact Migrant Solidarity Group member Dr Frank Arnold has written extensively on the failures of the Home Office to safeguard the health and well-being of immigration detainees and has helped expose the inadequate healthcare provision in detention centres.

The lives of those detained are only put in further jeopardy by the risk of an outbreak of COVID-19 in the detention estate.

As part of legal action taken against the Home Office by the law firm Duncan Lewis, public health expert Professor Richard Coker provided an expert report warning that detention centres provide ideal incubation conditions for the rapid spread of coronavirus and forecasted that 60% of detainees could be infected.  Despite guidance from medical and public health officials, the Home Office continues to maintain that they are following Public Health England guidance to protect detainees. Home Office statements have gone on to stress that they “remain committed to removing foreign national offenders or those who violate our immigration rules” ─ demonstrating how maintaining a tough stance on immigration is prioritised over the health and well-being of people caught up in the structural violence of borders. 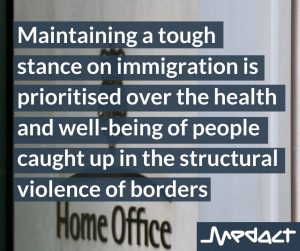 In March, the High Court rejected a legal challenge to free all remaining immigration detainees and the government has continued to detain people and carry out deportations throughout the pandemic. As of May, there were 313 people still in immigration detention in the UK.

The pandemic has shone a light on intersecting crises in our prison and detention systems, and the desperate need to rethink our approach to security and well-being. Health workers have a vital role to play in this ─ advocating for the right to health and well-being for all, which includes challenging institutions harmful to people’s well-being. If you are a health worker interested in the links between policing, imprisonment and coronavirus, we would like to hear from you – please email [email protected]