COVID-19 has brought into the public consciousness the inherent interconnectedness of public health globally. When public health is threatened in one country or amongst one community, the ripple effects are felt across the world.

Despite this, some countries that have or may be heavily impacted by the pandemic have not met with support from the international community.

Amongst these, Iran, Cuba and Venezuela continue to face US-led sanctions programmes, whilst the Israeli Government has enforced a blockade of the Gaza Strip for the last 13 years. Sanctions have been weakening the public health systems of these countries for decades and, if they are not lifted, they will have grave impacts on their ability to tackle COVID-19. But sanctions also represent a threat to the global struggle to treat the pandemic: with nations imposing them failing to realise that the global community must be united to minimise the spread of COVID-19.

Israel’s 11-year land, sea and air blockade prohibits the import of everything except food, animal fodder, livestock, fuels and medical supplies into Gaza, and bans all Palestinian exports. Compounded by years of asymmetric conflict, the blockade has crippled Gaza’s health sector, weakening its ability to respond to a global pandemic.

According to the World Health Organisation, almost half of Gaza’s medical equipment is outdated and the vast majority of health infrastructure damaged during the 2014 war has not been rebuilt, due to construction material scarcity. The existing hospitals and healthcare centres are plagued by chronic electricity and water shortages and a crippling lack of ICU beds and ventilators. The Palestinian health authorities are dependent upon foreign aid, and have seen their budgets shrink in recent years, reducing their already limited capacity to safeguard public health.

To make matters worse, the people of Gaza are increasingly unable to get the treatment they need in Israeli hospitals, with patient permit approval rates falling year on year. For too long the Israeli government’s blockade has undermined the health outcomes of the people of Gaza, but in the face of COVID-19 they must urgently change tact and prioritise public health over the blockade. This is why Medact has joined 18 other human rights and health organisations calling on Israel to lift the blockade of Gaza and enable the proper functioning of its health system in face of the coronavirus pandemic.

The US administration imposed unilateral sanctions on Iran from the 1980s right through to 2015, when these were eased under the terms of the Joint Comprehensive Plan of Action (JCPOA, also known as the “Iran nuclear deal”). Under the accord, Iran gained access to over $100 billion worth of assets frozen overseas, the ability to sell oil on international markets, and the use of the global financial system for trade, in return for limiting sensitive nuclear activities and allowing international weapons inspectors to enter the country. However, the international community’s hopes of increased geo-political stability in the region were dampened when the Trump administration pulled out of the nuclear deal in 2018 and the US swiftly re-imposed economic sanctions on Iran ─ plunging the value of the Iranian currency down, quadrupling inflation and driving away foreign investment. Further sanctions were applied as recently as March, despite Iran having over 40,000 reported cases of COVID-19. To date, it is reported that over 6,000 people in Iran have died after contracting the virus.

Similar to the blockade imposed on Gaza, medicine and medical supplies are exempt from sanctions. However, the knock-on effects of restrictions on exports and foreign exchange on the economy make it difficult for the Iranian Government to afford to pay for imported medical equipment. COVID-19 has come at a time when Iran was already dealing with spiralling medicine costs and, as the Lancet reports, “this financial situation makes the funding of adequate prevention, diagnosis, and treatment of COVID-19 impossible”. The Financial Times recently covered the plight of Iranian healthcare professionals ─ who are working 19-hour days without Personal Protective Equipment (PPE), testing kits and other vital medical supplies.

The Iranian Government is appealing to the international community to help secure vital medical equipment and for as long as they are cut off from global supply chains, they will have no other option but to hope that the world listens and lends them support.

The pandemic has yet to hit Venezuela with full force, but economic sanctions have contributed to what the New York Times describe as “the largest economic collapse in a country outside of war since at least the 1970s”, and this has naturally devastated the healthcare system. There are only 73 intensive care beds in the whole country, whilst only a quarter of Venezuela’s doctors have access to a reliable supply of water. Two-thirds are without masks, gloves or soap. The country is one of the most under-prepared in the world for a pandemic, according to a 2019 study by the Global Health Security Index.

The Venezuelan Government recently applied to the IMF for a $5 billion loan to help deal with the oncoming pandemic, but this was refused because of the political instability and lack of clarity over who is in fact President of the embattled country. This refusal will affect the 28 million people in Venezuela, and particularly those most marginalised, from accessing a properly-functioning public health system.

Reports at the end of March, meanwhile, suggested that the US administration had offered to ease sanctions ─ but only on the condition that the Venezuelan government accept US plans for a transitional government.

It is clearly concerning to see political conditions placed upon sanctions relief to prevent a public health disaster.

The double impact of sanctions on Cuba

The US has imposed sanctions on Cuba since 1960 ─ despite the United Nations overwhelmingly voting against the blockade for the last 30 years. Cuba’s prioritisation of public health and contribution to medical humanitarianism are well-documented, and even more impressive considering the economic pressures exerted on the Caribbean Island. Since the COVID-19 pandemic began, Cuba has stepped up its humanitarian contribution to fighting the virus, sending rapid response medical teams to Italy, Venezuela, Nicaragua, Suriname, Jamaica, Grenada and Angola.

Meanwhile, the USA has blocked the export of PPE to Caribbean countries who had purchased medical equipment from American production companies. The contrasting approaches of the two countries to addressing the global pandemic are stark; and there is a cruel irony in how US sanctions will not only harm Cuba itself, but also impede its efforts to lend assistance to those around the world who need it.

The blockade impinges Cuban efforts to import and export resources, and foreign cargo companies are reluctant to deliver goods to the island out of fear that they will be prosecuted by the US government. The Cuban government recently complained that a shipment of vital medical aid, including ventilators and rapid diagnostic kits, was halted from entering the country because the American shipping company tasked with transporting the goods feared breaching the sanctions regime. Cuban officials have also complained that a Colombian airline company refused to deliver medical aid because the airline’s main shareholder was an American company that feared legal action as a consequence of importing goods to Cuba.

From exclusion to international solidarity

As with Gaza, Venezuela and Iran, the exclusion of medical equipment from economic sanctions is clearly an inadequate safeguard to prevent sanctions weakening the public health systems of embargoed countries. It is of the utmost importance that economic sanctions are lifted or significantly eased ─ for the duration of the pandemic at least ─, so countries such as Iran, Venezuela and Cuba have a better chance to strengthen their health and welfare infrastructure. 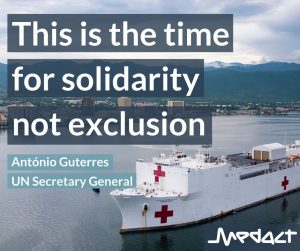 The international community has resolutely condemned the persistence of economic sanctions since the outbreak of COVID-19. The Director of the WHO reminded world leaders that “we’re all in this together, and we can only save lives together”, whilst the UN Secretary General stressed that “this is the time for solidarity, not exclusion.” COVID-19 is not deterred by national borders and its spread can only be halted by international co-operation and a co-ordinated public health approach that supersedes political enmities.

Health workers have long realised the need for international solidarity. We hope that the world listens to them in the face of COVID-19.