Always Was, Always Will Be 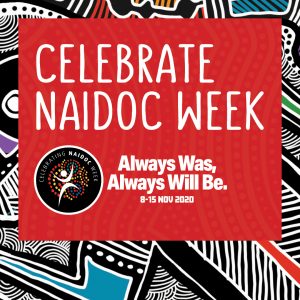 I acknowledge the ongoing discussion about the correct terminology to describe the people who inhabited Australia prior to European colonisation and their descendants. For the purpose of this blog, I have used the terms “Indigenous”, “Aboriginal and Torres Strait Islander,” and “First Nations” interchangeably.

Last week (8th – 15th November 2020) was NAIDOC week in Australia – an annual celebration of the history, culture and achievements of Aboriginal and Torres Strait Islander peoples. The theme of NAIDOC this year was:

Always Was, Always Will Be.

The unwritten part of that often-quoted sentence is “Always was, always will be, Aboriginal land”. The theme speaks to the fact that Indigenous Australians have occupied the country for over 65,000 years – the world’s oldest continuous civilisation. However, since the arrival of European colonists in the 18th century, many Indigenous populations have been driven off their land (and/or massacred), which has then been exploited for mass agriculture or mining operations. This year’s NAIDOC Week hoped to highlight both this wanton destruction of the environment and the struggles for land rights that have occurred as attempts have been made to protect and wrestle back control of ancestral homes. 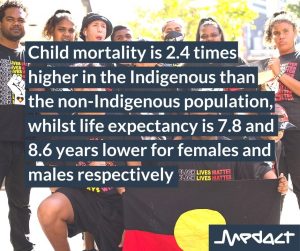 The long history of colonialism and dispossession has given rise to gross social disparities between Indigenous Australians and the rest of the population. This is demonstrated by disproportionately lower rates of average income & literacy and significantly higher rates of incarceration – staggeringly, Indigenous adults account for well over a quarter of prison inmates despite making up only 2% of the total population. There is extensive evidence to show that such social factors are strong predictors of poor Indigenous health outcomes in Australia. According to official government statistics, child mortality is 2.4 times higher in the Indigenous than the non-Indigenous population, whilst life expectancy is 7.8 and 8.6 years lower for females and males respectively. High levels of communicable disease, including notably one of the highest rates of rheumatic heart disease in the world, reflect issues with poor access to healthcare and decent housing. Meanwhile, non-communicable diseases are also present in large numbers, with 46% of Indigenous people suffering from at least one significant chronic health condition. Common complaints such as diabetes, kidney failure and ischaemic heart disease are driven by high rates of smoking, obesity and, especially in remote communities, difficulty in accessing fresh fruit and vegetables.

How, then, is it possible to address both the struggle for land rights and the battle against health inequality? 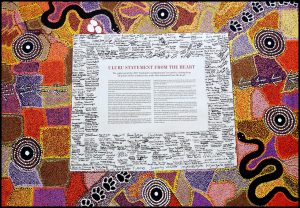 Photo of the Uluru Statement from the Heart.

In 2017, over 250 Indigenous representatives from all over Australia held an unprecedented gathering at Uluru to discuss these matters and more. There they produced the Uluru Statement from the Heart. Amongst other things, that statement called for a “First Nations Voice enshrined in the Constitution” – a representative body guaranteeing that Indigenous perspectives on political matters are heard in parliament when decisions are being made that affect the Indigenous population. These perspectives should ensure that policy better suits the needs and wants of the Indigenous communities, thereby leading to more effective interventions to tackle the societal inequalities acting as social determinants of poor health.

Perhaps unsurprisingly, the demands of this statement fell largely on deaf ears, with many politicians, including then Prime Minister Malcolm Turnbull, claiming such an idea to be either unconstitutional or a threat to democracy itself. 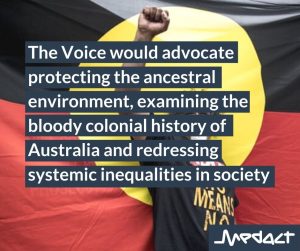 If we interrogate why the Voice is so necessary and why there is such resistance to it from the Australian government: it is because the demands of many Indigenous Australians, along with their historical understanding, are antithetical to those of the government. The Voice would advocate protecting the ancestral environment, examining the bloody colonial history of Australia and redressing systemic inequalities in society. In doing so, it would directly challenge a neoliberal framework that seeks to bury its past, exploit the land for natural resources and maintain disparity.

The challenges facing Indigenous Australians are extreme, but they are not entirely unique. All over the world, indigenous communities face poor health outcomes due to alienation from the land, socio-economic marginalisation and a lack of meaningful political representation. Until those populations are able to advocate for themselves and challenge dominant neoliberal assumptions, we will be left with a socio-economic order that was established on and holds at its core a necessity to perpetuate inequality.

Always Was, Always Will Be. 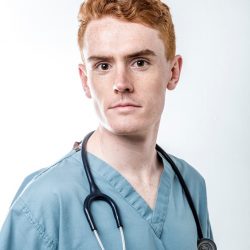