Is there a place for civil nuclear power in the 21st century?

To correspond with the recent publication of the paper ‘How Nuclear Power powers the Bomb’, co-authored by Angelika Claussen (European regional vice president of IPPNW), Frank Boulton (Medact) and Alex Rosen (IPPNW-Germany), we publish this blog by Frank Boulton below outlining the financial, environmental, health and geo-political arguments around nuclear power.

‘How Nuclear Power Powers the Bomb’ describes the inter-dependency of the civilian and military nuclear industries, and includes the emergence of nuclear propulsion engines for the military as templates for producing civilian electricity from small modular reactors (SMRs).

Medact has never had a formal ‘policy’ on civilian nuclear power. When the Medical Campaign Against Nuclear Weapons (MCANW) was started in 1980, the focus was on weapons while some doctors accepted nuclear electricity as a ‘necessary evil’. Other IPPNW affiliates such as Finland took similar approaches. In 1980s Britain, when apocalyptic novels featured post-nuclear-war mutant humans (such as Louise Lawrence’s 1985 novel Children of the Dust), MCANW was also countering official misinformation in ‘Protect and Survive’. After Chernobyl (1986), MCANW was often asked about radiation risks from nuclear power plants (NPPs).

There are three broad environmental considerations regarding NPPs:

Cosmic rays from outer space, and traces of uranium and thorium in the ground, are the main sources of natural background radiation which, although low, is not harmless. Anthropogenic activities increase background radiation, particularly in hotspot legacies such as Sellafield, resulting in one of the most intensively researched fields in environmental epidemiology. Since 1985 the UK Committee on the Medical Aspects of Radiation in the Environment (COMARE) has issued 18 reports, ten of which relate to nuclear installations. The occupational radiation received by nuclear workers puts them at significantly more risk of acquiring cancers and leukaemias although the risk for individual workers is not high: but the possible increased incidences in leukaemia in children living near operationally normal NPPs are probably not related to radiation but to exceptional biological deviations in maturing immune systems.

Although risks from routinely operating NPPs may be relatively low, mitigation against sabotage and other hostile actions, or accidents (Chernobyl, Fukushima, etc.,) require advanced measures such as “9/11-proofing” or cyber-proofing. The ultimate mitigation could justifiably be ‘no NPPs’ as costs are now prohibitive. On 25 September 2019 the New Scientist announced that the new NPP at Hinkley Point C requires an extra £2.9 billion on top of earlier construction estimates of £20 billion.

Could the nuclear industry benefit society?

In 2018 the total world energy demand was about 1.75 x 10 17 Wh. The bulk came from coal, gas and oil, which are inefficient when used directly (e.g. oil-fueled transport) or indirectly via steam-turbine electricity: ‘good’ turbines, whether used for coal or NPPs, have about 35% efficiency.

In 2018, the electricity generated by NPPs was less than 2% of the above total. A supply dominated by direct renewable electricity would lower demand considerably; but projected population increases, electric road vehicles and developments including desalination indicate that global demand by 2050 may more realistically still be around 2018 levels. Although nuclear advocates see a role, even six-times more NPP capacity might supply only 10% of the world’s demand. 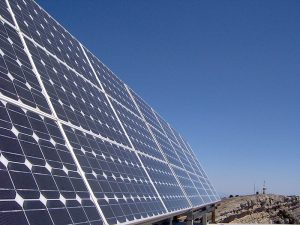 The picture now is completely changed as renewables show remarkable improvements in operating quality, efficiency, costs and installation times. Although ‘the sun doesn’t always shine’ or ‘the wind always blow’, advances in – for example – battery storage are impressive. Arguments that nuclear provides a steady ‘base-load’ to meet black-outs or big surges are losing ground: although modifying grids to accommodate renewables-dominance will be challenging, this direction of travel is recommended.

Maybe, but the priority is to ascertain optimal ways of developing a nuclear-weapon free, decarbonized and peaceful world.

According to the Overseas Development Institute, alleviating the abject poverty of 800 million people worldwide requires ‘appropriate targeting of aid’. Whereas populations in abject poverty are declining in South and East Asia, they are not in sub-Saharan Africa where 57% have no electricity.  Nuclear exporters, with tacit IAEA support, are eyeing up countries such as Kenya as potential customers for NPPs and SMRs: Kenya is tapping geothermal sources and has recently opened Africa’s largest wind power project so should resist adding nuclear.

The strongest reasons to oppose expanding nuclear technology are the military links and weapons proliferation. Although the world will get more energy-hungry, reliable and cheaper renewables could rapidly replace fossil fuels with no need to expand the uneconomic nuclear option. Coordinating renewables’ expansion with poverty alleviation, especially in Africa, offers a win-win for promoting peace and reversing anthropogenic climate change through nuclear-free decarbonization.