Either Civil Rule or Everlasting Sit-in

The situation in Sudan is ever changing. Since December 2018 Medact has been in contact with the Sudan Doctors’ Union UK, who are connected with the civilian uprising in Sudan. Their vision for civilian rule is upheld by a desire for a publicly funded healthcare system. In this piece, we provide the background to the ongoing struggle and platform the voice of Dr. Mohammed Abdelraoof Hussien, a doctor in Sudan.

In December 2018, protesters marched in Sudan’s northern city of Atbara about the tripling of the price of bread. These protests spread across the country and to Khartoum, highlighting the frustration and anger felt about rising living costs, high unemployment and the degradation of public services. However, the demands of the protests quickly broadened to call for the President Omar Al-Bashir, who had been in place for 30 years and was infamous for various human rights abuses and involvement in war crimes, to step down. 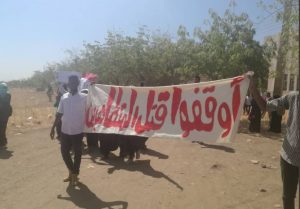 Photo of a protest in Sudan. Translation: ‘Stop Killing Protesters’

The protests across Sudan have been daily occurrences, even lasting through the night, since December. Since the beginning of the protests, thousands have joined in both rural and urban areas. The protests have, however, been met with brutal force. 37 protesters were killed by security and military forces in the first five days alone, according to Amnesty International. To date, it is believed that over 100 people have been killed by security forces – as reported recently by health professionals in Sudan in the Conflict & Health journal.

Alongside this violence used against protesters, over 800 have been arrested and imprisoned, many without charge or access to a lawyer. Of those arrested are a number of healthcare workers and members of the Sudan Doctors’ Committee (SDC) and the Sudan Doctors’ Syndicate – who continue to play a key role in the protests alongside the Sudanese Professionals Association. Since December, doctors in Sudan have been intermittently on strike to put pressure on Bashir’s government – and now on the Transitional Military Council (TMC) led by Generals Abdel Fattah al-Burhan and Mohamed Hamdan Dagalo – to step down and transfer power to civilian rule; to end the dismantling of public health services; and for a health system for people over profit. Since the beginning of the protests, many doctors involved in the SDU and healthcare workers have been arrested without charge, and security services have attacked hospitals reportedly entering to arrest both doctors and patients, using weapons inside the premises.

Despite President Al-Bashir stepping down on 11 April 2019, the protests have continued. The TMC show no willingness of setting in place a transition into civilian rule, continuing Al-Bashir’s repressive tactics. On the 3rd of June 2019, the Rapid Support Forces (also known as the janjaweed) allegedly under orders from the TMC violently attacked the peaceful sit-in in front of the army headquarters – with reports at the time of writing from the SDC that over 100 were killed and dozens raped, including doctors.

We publish below words by Dr. Mohammed Abdelraoof Hussien, a doctor in Sudan, written on the 10th of May 2019.

“The words in the title obviously reflect how escalating is the awareness of Sudan’s youth who successfully overthrew a criminal dictator for the third time in the history of this unlucky country whose natural resources exceed what Germany, UK, Japan, South Korea, Malaysia and Gulf countries possess.

Since its independence from the UK in 1956, Sudan has been governed by military dictatorships for 53 years, while democratic governments have ruled for just 10 interrupted years. Sudan’s revolutionaries this time heeded the lessons from previous uprisings in Sudan and other countries: half a revolution is a suicide for the whole nation; the Sudanese know more than before that the military rule is synonymous with oppression, corruption and failure in all aspects. 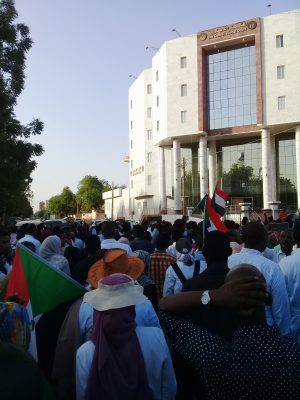 Historically, the military dictatorships used repeated flimsy excuses to justify the ‘hyperover’ absurd security and sovereign expenditure; the generals used to show up on TV to tell the people about ‘maintaining the national security’ to legitimize their absurd intentionally-made wars. The generals are ready to cut costs when it comes to services expenditure under the pretext of ‘austerity’ and ‘economic crisis’; but apparently this does not apply to the unlimited fuel budget for their own latest-model cars. This is what Al-Bashir and his regime used to do, this is why Sudan under Al-Bashir’s rule was lowest in all the international rankings of democracy and development.

It is obvious that the ruling Transitional Military Council (TMC) is just an extension of Al-Bashir’s black era; all the members of TMC intellectually and militarily belong to Al-Bashir’s regime. It is impossible in Sudan to reach such high military ranks unless security reports confirm your loyalty to the regime – this is how Al-Bashir stripped the army from its neutrality and turned it into notorious partisan mercenaries following orders of the corrupt Gulf’s oil sheikhs to take part in Yemen’s war in which they have no strings attached.

Sudan’s revolutionaries and their legal representative The Forces of the Declaration of Freedom and Change decided to put an end to all these farces: either by handing over power to a civil authority or by bringing the ongoing military HQ sit-in to the Guinness World Records as the longest sit-in ever.

Definitely, this is not the end. Sudan’s revolutionaries have many peaceful resistance weapons, such as civil disobedience which has been historically proven to be the ‘knock-out’ for any military or oppressive regime – sooner or later.”

Taking action in the UK

On Friday 21 June, a vigil is being held in London for those who have been killed during the peaceful protests across Sudan since December 2018. You can find details of this protest here. If you’re a healthcare worker and interested in going with members of Medact, please e-mail [email protected]

You can read a letter coordinated by Medact and signed by over 200 healthcare workers in the UK sent to the Foreign Secretary Jeremy Hunt, urging him to take action to stop the killing of peaceful protesters in Sudan, here.