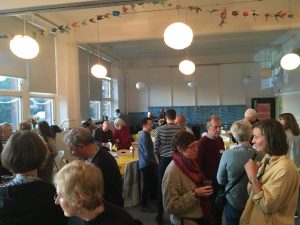 A busy, productive and enjoyable weekend was had by Medact members in Glasgow  and beyond on 21st and 22nd September.

Held in Kinning Park Centre, a converted Victorian school close to public transport, with delicious food provided by social enterprise Milk, and music and dancing, it was a fine opportunity for members old and new to meet and connect.

The five major global food challenges are under-nutrition caused, not by a lack of food, but by power and violence, chronic diseases caused by an unhealthy food environment, the thinning of biodiversity caused by farming and fishing, the reciprocal impact of food on climate and insecure, badly paid jobs throughout the food chain. In Scotland, the poorest 20% of the population struggle to afford a good diet and contend with major food insecurity, two thirds of the population is overweight and agriculture accounts for 22% of our greenhouse gas emissions.

The state has an obligation to organise the food system in a way which respects, protects and progressively realises the right to food. We need to recognise the right to food in Scottish and UK law to provide a means of monitoring and accountability. Scottish Parliament has told Government to bring forward a Good Food bill tackling agriculture, health, social justice, environment and waste.

What concrete measure could be taken to realise the right to good food? Redesign our foodbanks and ensure dignified access to good food. Give food producers access to land. Provide support for short food chains. Reduce harmful impacts from farming. Transform the food environment to match dietary need. Pay attention to those most likely to have their rights compromised – babies and children, people in care, refugees and asylum seekers. And, finally, Pete offered some suggestions as to what Medact members could do; support and inform the right to food campaign, pay more attention to the role of food in health, and work with others to find alternatives to foodbank culture. You can read an article by Medact’s Interim Director on Common Space about this issue.

It was invaluable to hear from someone who not only has the ear of Scottish Government and works closely with them but is, himself, an organic farmer.

Health professional duty to speak out: Later in the evening, Lesley Morrison, a member of Medical Campaign Against Nuclear Weapons (a predecessor of Medact) since 1981, spoke about the elephant, not in the room, but in the Clyde, the obscene Trident nuclear weapons system sitting off the beautiful west coast of Scotland, and what Medact Scotland is doing to get rid of it. Issues of disarmament, climate change and human rights are all inextricably interlinked and, as health professionals, we have a duty to speak out about them. As the GMC guidelines state, the duty of a doctor is “to protect and promote the health of patients and the public” and we should be open and proud of using our voice about these major public health issues.” As Alice Walker said, “Activism is my rent for living on the planet”.

In an Agenda piece in the Glasgow “Herald” the following day, Lesley argued, “In the same way that smoking used to  be accepted as normal part of life until doctors began to speak out about the risks and people’s behaviour began to change, doctors are speaking out about the risks of nuclear weapons. Risks of intentional or accidental nuclear war, of delaying an effective response to climate change because resources of money and expertise are being consumed by the arms industry. And, in the same way that the tobacco industry did not like hearing what doctors had to say, the arms industry is unhappy that the truth about the catastrophic health effects of nuclear weapons and the profit motive behind them are being revealed.” 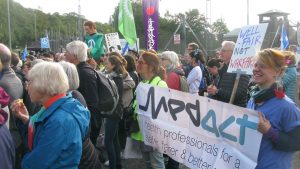 “Nae nukes anywhere”: We took that message to Faslane, “Treatment not Trident”, “Beds not bombs” and we distributed prescriptions which offered  a diagnosis of Global Insecurity and a treatment of Nuclear Disarmament stat. We marched alongside banners from the campaign, Don’t bank on the bomb, (whose divestment guide had just been published) and from the Campaign Against the Arms Trade and we heard powerful speeches including one by the poet, the Scottish Makar, Jackie Kay.

We all have a voice and, as health professionals, it’s a voice that people tend to listen to. Join Medact and use your voice by getting involved in our campaigns which fight for health equality for all.

A Medact Member
Medact is first and foremost a membership organisation - and members are crucial to our work.

Find out more about becoming a member

Latest posts by A Medact Member (see all)