First we closed our doors to patients – and now doctors too? 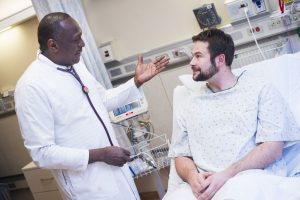 Over the past month, the ‘really hostile environment for illegal migrants’ conceived of in 2012 by then Home Secretary Theresa May has received more public attention than ever before. The case of 64-year-old Albert Thompson – whose real name is Sylvester Marshall – denied radiotherapy due to his inability to demonstrate his immigration and residency status in the UK and unable to pay the £54,000 upfront, caused waves within the media, Parliament and general British public. To many, they were just becoming aware of the ways in which the ‘hostile environment’ works, and how far the net is cast to identify and punish those who may not have the right papers.

This week, it is reported that Theresa May has blocked access to visas for doctors from overseas to fill staff shortages in the NHS, with 400 doctors refused visas since December. Some of these doctors were recruited by the NHS for specialist training, and were then denied tier 2 visas due to the fact that their salaries do not meet the high threshold. As a result, 35 NHS Trusts have accused immigration officials of putting patient safety at risk, with the head of the GMC Charlie Massey saying, “It is frustrating that while one government department is working hard to recruit doctors into an overstretched health service, another is enforcing eligibility conditions which stifle those efforts.”

It comes as no surprise that the government seems to be prioritising reaching immigration targets over patient safety and the overall well-being of the NHS. The introduction of charging up to 150% of the cost of healthcare treatment for ‘overseas visitors’, and of upfront charging for care deemed to be ‘not immediately necessary’, has consistently been shown to put patients at grave risk. Medact submitted evidence from healthcare workers to the Department of Health and Social Care that showed in large part that charging for secondary care leads to the deterrence of those with complicated or no immigration status. Doctors of the World UK have reported that two in three pregnant women who attend their clinic in London have not received antenatal care by the recommended 10 week mark, with one in four not receiving any care at 18 weeks.

Policies which tighten visa restrictions for doctors, and force the Health Service to charge overseas visitors for healthcare, suggest a level of selective amnesia about how much the UK – and the NHS in particular – has benefited from resources from overseas. Many of those affected by both increasing visa restrictions and charging for NHS secondary care come from countries colonised by Britain in the not too distant past. Sylvester Marshall came from Jamaica (which gained independence from Britain in 1962), and it is reported that 100 doctors denied visas are from India (which gained independence from Britain in 1947). Taking into consideration the wealth, natural resources and labour power claimed by the British Empire – and the undoubted use of these in the building of institutions like the NHS – the growing immigration restrictions seem short sighted to say the least.

In the years immediately following the advent of the NHS, doctors from India and nurses from Jamaica – one of whom was Sylvester Marshall’s mother – were recruited to staff the NHS en masse. In the year of the 70th anniversary of both the NHS and of the arrival of the SS Empire Windrush, bringing passengers from the Caribbean invited by Britain to assist with post-war reconstruction, it is ironic that the same people called upon by the NHS and UK government now face being denied healthcare and refused work visas.

With so-called ‘deliberate health tourism’ accounting for only up to 0.3% of the overall NHS budget, it seems that the motivation for restricting migrants’ access to the NHS is ideological rather than about cost recovery. And the commitment shown by government to block visas for much-needed doctors from overseas highlights the extent to which it prioritises immigration controls over public health, patients and the endurance of the NHS. It is time that the ‘hostile environment’ for migrants in the NHS is ended.

Join the Medact Refugee Solidarity Group in campaigning for everyone’s right to access healthcare, and against healthcare workers being turned into border guards.