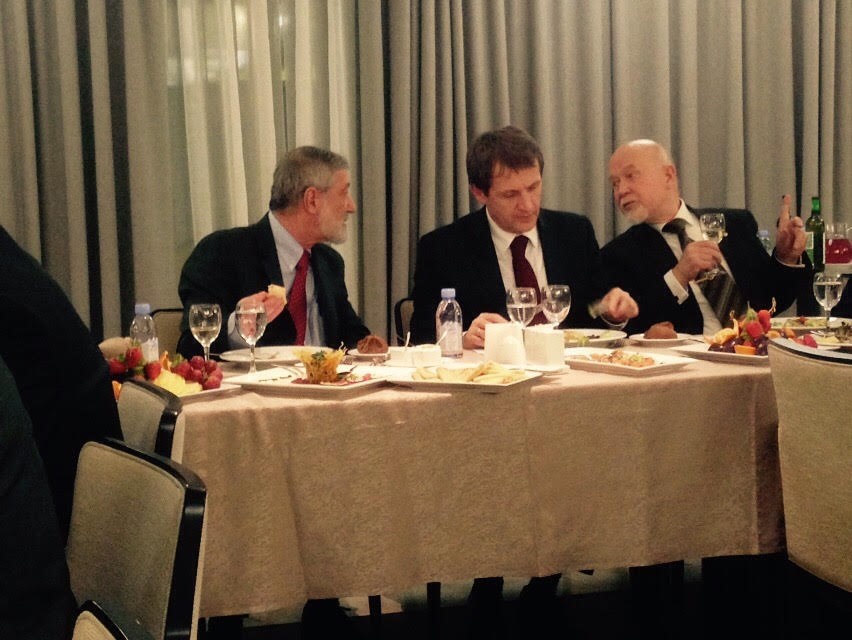 The Meeting was held to discuss, at a time of increasing tension between Russia and NATO, how the medical professions in the West and in Russia can best continue our historical collaboration in preventing the disastrous effects of nuclear war on the health of the planet and of humankind. During the course of the meeting, a letter highlighting the dangers of nuclear war was presented to the office of Russian Prime Minister Dmitri Medvedev.

Since 1945, hostile exchanges of nuclear weapons have often come close (‘near-misses’), sometimes when tensions were not particularly high and including episodes after the fall of the Berlin wall; but there is always an increased risk of ‘accidental’, ‘unintended’ or ‘maverick-inspired’ nuclear war when international tensions are heightened. Following the inauguration of Donald Trump as President of the USA a month ago, global survival is under more threat now than at any time since the fall of the Berlin Wall in 1989. Trump’s electoral campaign and his policies under the banner ‘America First’ are regarded by IPPNW as isolationist, contrary to the fundamental interests of healthy globalisation, and coloured by misogyny and racism. His use of Presidential Orders, attitude to US Court rulings against them, and blatant disregard of the responsible free press – in US and beyond – are inherently very dangerous, promoting as they do the delusion of US cultural superiority. The advocacy of yet increased US militarisation and the eastward expansion of NATO are perceived by Russia as provocative. IPPNW recognises the validity of these Russian fears but is also concerned that military countermeasures risk aggravating rather than alleviating Russia/NATO relations.

The dangers are exemplified by Trump’s ambivalent attitude to nuclear weapons1: although during his Presidential campaign he seemed to recognise the dangers of nuclear weapons coming under the control of ‘irresponsible’ leaders, he has advocated increasing the development and deployment of US/NATO nuclear weapons and has demonstrated an apparent readiness to use them. His threat to NATO partners who ‘fail’ to play their ‘full part’ in supporting (i.e. financing) NATO2, and his comments on the admittedly very difficult circumstances in Ukraine3 and Syria4, further illustrate his narrow views of global priorities and ‘security’.

High quality scientific analysis, based on good evidence modelled on natural events such as volcanic eruptions, has posited that even a relatively limited hostile exchange of nuclear weapons (less than one percent of current global stocks) would very likely result in widespread agricultural crises and years of global ‘nuclear famine’. This would be due to diminished penetration of sunlight to croplands because of persistently high amounts of soot thrown into the atmosphere by the multiple nuclear detonations. Although the causative scenario most often portrayed is a nuclear war between India and Pakistan, to assume that these nations’ leaders may be less ‘responsible’ than current Western Leaders who still advocate first use of their nuclear weapons (based on the 1996 advisory ruling of the International Court of Justice) was difficult to justify even before Trump. Over ten or so years of such a famine over a billion could starve to death; and people far remote from and in no way involved with the warring parties could be affected, thus creating a form of mass global suicide.

The IPPNW report ‘Nuclear Famine: two billion people at risk?’5 will be widely translated, including into Russian, to widen access, distribution, discussion and debate. Research into the effects on global crop yields continues, and updates for each world region will be made available when they are published.

In the long term, in the interests of global peace, security and the pursuit of human rights and mutual responsibilities for all, we need to develop universal policies of tolerance and respect for human diversity. But right now, the risks from Trump’s policies are so high that calls for an immediate ban on any use of nuclear weapons by any side are justified. This applies particularly between US/NATO and Russia as these two blocks possess 93% of the current global arsenal of 15,000 or so nuclear warheads. Responsibility lies on the military and civil societies in US/NATO and in Russia to ensure that the current state of emergency does not turn into outright nuclear war. As a community of physicians and health professionals, we in IPPNW’s US, European and Russian affiliates undertake to continue our advocacy of a healthy society based not on military might but on the promotion of health and welfare for all. War is bad for health: a nuclear war could destroy us all.

IPPNW supports the Nuclear Weapon Ban treaty (otherwise known as the ‘United Nations Conference to negotiate a legally binding instrument to prohibit nuclear weapons, leading towards their total elimination’) being debated at the UN during the course of this year. Even when this ‘Instrument’ is ratified, our task – to prevent nuclear war – will continue to the last nuclear weapon remaining on Earth. Our work, to prescribe a ‘world without nuclear weapons’, is vital: were the prescription to be taken, world health would be considerably enhanced.