The City of Hiroshima – Peace Declaration

Medact has received a letter from the Mayor of the City of Hiroshima, along with a copy of their Peace Declaration.

The Medact Hiroshima Appeal 2016 has just been launched, and it will enable us to continue and grow our work for peace. We join the City of Hiroshima in their renewed determination to ‘pledge to do everything in our power… to abolish nuclear weapons and build lasting world peace.’ 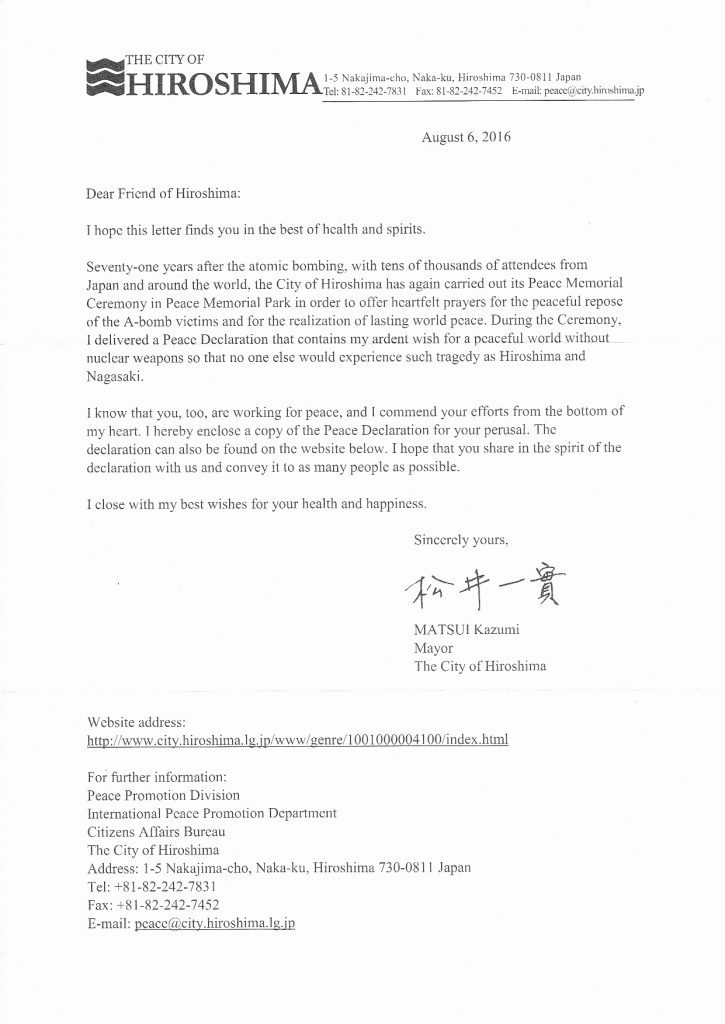 1945, August 6, 8:15 a.m. Slicing through the clear blue sky, a previously unknown “absolute evil” is unleashed on Hiroshima, instantly searing the entire city. Koreans, Chinese, Southeast Asians, American prisoners of war, children, the elderly and other innocent people are slaughtered. By the end of the year, 140,000 are dead.

Those who managed to survive suffered the aftereffects of radiation, encountered discrimination in work and marriage, and still carry deep scars in their minds and bodies. From utter obliteration, Hiroshima was reborn a beautiful city of peace; but familiar scenes from our riversides, patterns of daily life, and cultural traditions nurtured through centuries of history vanished in that “absolute evil,” never to return.

Seventy-one years later, over 15,000 nuclear weapons remain, individually much more destructive than the one that inflicted Hiroshima’s tragedy, collectively enough to destroy the Earth itself.

He was a boy of 17. Today he recalls, “Charred corpses blocked the road. An eerie stench filled my nose. A sea of fire spread as far as I could see. Hiroshima was a living hell.” She was a girl of 18. “I was covered in blood. Around me were people with skin flayed from their backs hanging all the way to their feet—crying, screaming, begging for water.”

Seventy-one years later, over 15,000 nuclear weapons remain, individually much more destructive than the one that inflicted Hiroshima’s tragedy, collectively enough to destroy the Earth itself. We now know of numerous accidents and incidents that brought us to the brink of nuclear explosions or war; today we even fear their use by terrorists.

Given this reality, we must heed the hibakusha. The man who described a living hell says, “For the future of humanity, we need to help each other live in peace and happiness with reverence for all life.” The woman who was covered in blood appeals to coming generations, “To make the most of the life we’ve been given, please, everyone, shout loudly that we don’t need nuclear weapons.” If we accept these appeals, we must do far more than we have been doing. We must respect diverse values and strive persistently toward a world where all people are truly “living together.”

Is it not time to honor the spirit of Hiroshima and clear the path toward a world free from that “absolute evil,” that ultimate inhumanity? Is it not time to unify and manifest our passion in action?

When President Obama visited Hiroshima in May, he became the first sitting president of the country that dropped the atomic bomb to do so. Declaring, “… among those nations like my own that hold nuclear stockpiles, we must have the courage to escape the logic of fear, and pursue a world without them,” he expressed acceptance of the hibakusha’s heartfelt plea that “no one else should ever suffer as we have.” Demonstrating to the people of the U.S. and the world a passion to fight to eliminate all remaining nuclear weapons, the President’s words showed that he was touched by the spirit of Hiroshima, which refuses to accept the “absolute evil.” Is it not time to honor the spirit of Hiroshima and clear the path toward a world free from that “absolute evil,” that ultimate inhumanity? Is it not time to unify and manifest our passion in action? This year, for the first time ever, the G7 foreign ministers gathered in Hiroshima. Transcending the differences between countries with and without nuclear weapons, their declaration called for political leaders to visit Hiroshima and Nagasaki, for early entry into force of the Comprehensive Nuclear-Test-Ban Treaty, and fulfillment of the obligation to negotiate nuclear disarmament mandated by the Nuclear Non-Proliferation Treaty. This declaration was unquestionably a step toward unity.

We need to fill our policymakers with the passion to solidify this unity and create a security system based on trust and dialogue. To that end, I once again urge the leaders of all nations to visit the A-bombed cities. As President Obama confirmed in Hiroshima, such visits will surely etch the reality of the atomic bombings in each heart. Along with conveying the pain and suffering of the hibakusha, I am convinced they will elicit manifestations of determination.

The average age of the hibakusha has exceeded 80. Our time to hear their experiences face to face grows short. Looking toward the future, we will need our youth to help convey the words and feelings of the hibakusha. Mayors for Peace, now with over 7,000 city members worldwide, will work regionally, through more than 20 lead cities, and globally, led by Hiroshima and Nagasaki, to promote youth exchange. We will help young people cultivate a shared determination to stand together and initiate concrete action for the abolition of nuclear weapons.

Here in Hiroshima, Prime Minister Abe expressed determination “to realize a world free of nuclear weapons.” I expect him to join with President Obama and display leadership in this endeavor. A nuclear-weapon-free-world would manifest the noble pacifism of the Japanese Constitution, and to ensure progress, a legal framework banning nuclear weapons is indispensable. In addition, I demand that the Japanese government expand the “black rain areas” and improve assistance to the hibakusha, whose average age is over 80, and the many others who suffer the mental and physical effects of radiation.

Today, we renew our determination, offer heartfelt consolation to the souls of the A-bomb victims, and pledge to do everything in our power, working with the A-bombed city of Nagasaki and millions around the world, to abolish nuclear weapons and build lasting world peace.

The City of Hiroshima 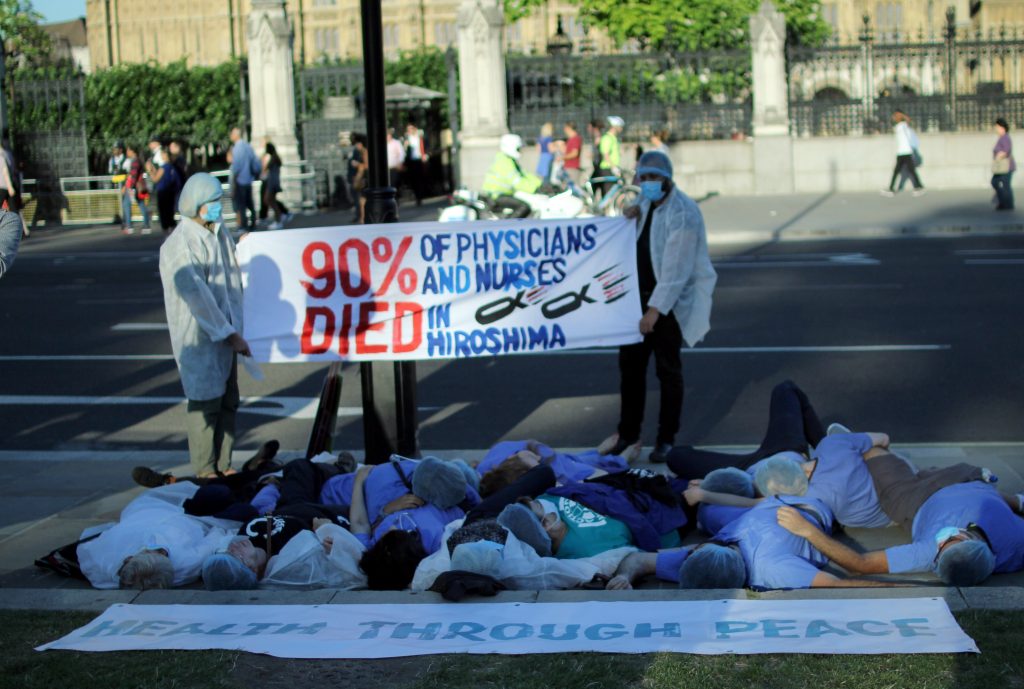