The Health Impacts of the Small Arms Trade

By Oliver Yerby, member of the Medact Arms and Militarisation (MAM) group.* Oliver is a fourth year medical student studying in Nottingham with a particular interest in peacebuilding, human rights and social justice. Contact MAM at [email protected] .

Last year in the United States, 13,471 people were shot dead1 – that’s roughly 37 people every single day. In countries that take a tougher line on gun control, change in this direction has almost invariably required some appalling gun massacre, such as the murder of 16 primary school children and their teacher at a school in Dunblane,2 or the killing spree in Port Arthur,3 Australia which left 35 dead and 23 wounded.

And this is before even considering the human toll, mostly caused by small arms,6 of ongoing wars and conflicts in Afghanistan, Iraq and Syria, among many other places.

Gun violence cannot be seen as merely a social problem, but should also be recognised as a serious global health problem alongside communicable disease, climate change and chronic health conditions.

The value of the legal trade in small arms is estimated at $8.5 billion USD every year;7 and while the illicit trade and trafficking of small arms is impossible to measure accurately, it doubtless adds a significant amount annually.

While this figure pales in comparison to the $1.6 trillion USD of military expenditures across the globe in 2010,8 it represents a stockpile of 875 million small arms.9 Moreover, the ease with which one can acquire a firearm is alarming.  (A very rudimentary google search listed hits for weapons costing as little as $139.00 USD).10

Small arms are differentiated from other weapons and weapon systems by their portability, and as such are culpable for gun-related homicides, suicides and the majority of deaths in war and conflict.11

Suicide, interpersonal violence and war all feature in the top ten causes of death for people aged 15-44;12 a large proportion of these deaths occurring through the use of fire arms.13

Gun violence cannot be seen as merely a social problem, but should also be recognised as a serious global health problem alongside communicable disease, climate change and chronic health conditions.

The real tragedy of gun violence is that while comprehensive strategies for combating other global health issues still require serious work, with tighter controls and investment in peace education and peacebuilding, tangible steps could be taken right now to reduce injuries and deaths from gun violence.

The Impact of small arms

Small arms take lives and affect individuals, groups and society in the short term but there is also a huge long term impact in the shape of physical and mental disability. Small arms have a negative transformative effect on society, eroding trust and militarising populations. Beyond the direct consequences of small arms are the indirect consequences; the cost of services that aren’t there because the money was spent on arms instead.

A firearm is involved in roughly 60% of violent deaths,14 amounting to 245,000 firearms deaths a year. In countries such as El Salvador, Jamaica and South Africa where firearm homicides are particularly prevalent, the annual death rate is higher than in many ongoing wars.15

There are at least two million people living with an injury sustained from a small arm in the last decade.

While the death rates are shocking, not every gunshot kills and many people survive firearm violence (often representing near miss homicides). Worldwide it is estimated that at least two million people are living with injuries from non-conflict firearm violence that have been sustained in the last decade.16 That’s two million people living with unnecessary injury, disability and mental health problems. The non-lethal consequences of small arms violence should not be overlooked in a treatment of interpersonal violence and will be looked at in more detail below.

In more economically developed countries, the proportion of people who are killed in interpersonal violence tends to be smaller. The top spot is instead taken by small arm suicides; for example, in the UK almost five times as many people are the victims of a gun suicide as are killed by gun homicides.17

Worldwide, suicide claims the lives of almost one million people a year; for men 30% of these are carried out with a firearm and for women, 13%.18 There is evidence to suggest that restricting access to means of suicide does reduce the number of deaths,19 particularly where the suicide was impulsive. This provides a strong impetus to increase the regulation of small arms.

In war and conflict, despite the destructive capabilities of larger weapons and weapon systems, it is small arms that are responsible for the majority of deaths.20 Yet regardless of the horrific cost of human life in protracted conflicts across the world, these deaths account for only 10-20% of the total deaths attributable to small arms each year,21 which sheds light on the prevalence of gun violence outside war zones.

As alluded to earlier, the impacts of small arms violence extend beyond deaths to the much greater number of people who are injured or permanently disabled by gun violence. There are at least two million people living with an injury sustained from a small arm in the last decade. Among the most disabling of these are spinal cord injuries, traumatic brain injuries and amputations, which regularly lead to permanent disability. The average length of hospitalisation for someone who has sustained only mild to moderate firearms injuries is thirteen days,22 and compared to other weapons, firearms tend to be associated with more significant long term physical consequences.23

But physical injury is far from the only long term health impact of firearms violence. The exact relationship between small arms violence and mental health in particular has not been studied extensively, but more generally it has been shown that in populations exposed to higher amounts of violence, there is a higher incidence of anxiety, depression, somatisation disorder and alcohol abuse.24

The consequences go beyond individual effects: the threat of violence alters social behaviours and damages relationships, as people are forced to adapt to the increased risk of violence on a daily basis, often leading to a vicious circle where affected populations arm themselves in an attempt to defend themselves.25 Larger scale armed conflict leads to further major problems such as the displacement of entire communities, famines and epidemics (particularly when vaccination programmes are interrupted).26

“Every gun that is made, every warship launched, every rocket fired signifies, in the final sense, a theft from those who hunger and are not fed, those who are cold and are not clothed”

While regrettably, the USA’s military spending increased under his administration, the point he made in this speech still stands. The impact that small arms have on health and wellbeing cannot be measured in death and disability alone. One of the most significant impacts small arms have is diverting spending away from areas where it is really needed, and into fueling violence and instability across the world. Most small arms violence occurs in the countries that are in the most need of investment in social development in order to improve health outcomes, raise literacy rates, and break the vicious cycle that entrenches firearms violence in communities. 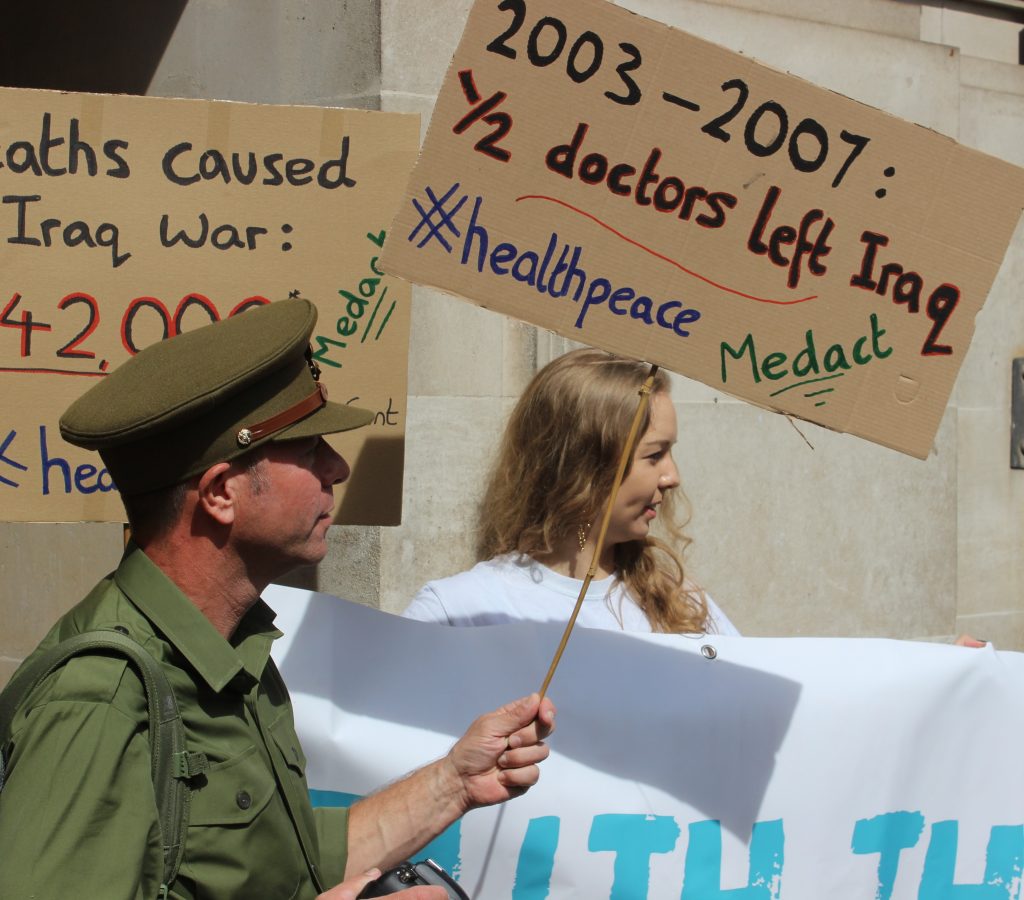 A Medact Member
Medact is first and foremost a membership organisation - and members are crucial to our work.

Find out more about becoming a member

Latest posts by A Medact Member (see all)