On Saturday 12th of March, the Medact Refugee Solidarity Group joined Movement for Justice by Any Means Necessary and gathered alongside two thousand other protesters to demand the closure of Yarl’s Wood, Britain’s most secretive and notorious immigration detention centre.

Yarl’s Wood, like nine other detention centres across the country, is where women and children who fled to the UK from war, torture and oppression, and whose asylum applications have been rejected, are imprisoned awaiting deportation.

As we arrived at the gates, women inside Yarl’s Wood waved hands and banners from the windows. Seeing these innocent people imprisoned led us to interrogate ourselves as to how such a place can be built? We are making prisoners of people seeking asylum and a safe home from conflict and violence. How it is that such little empathy for these survivors of war and violence has become normalised? And why are refugees treated as criminals, when our own government fuels the wars they flee from by supplying arms to abusive regimes? 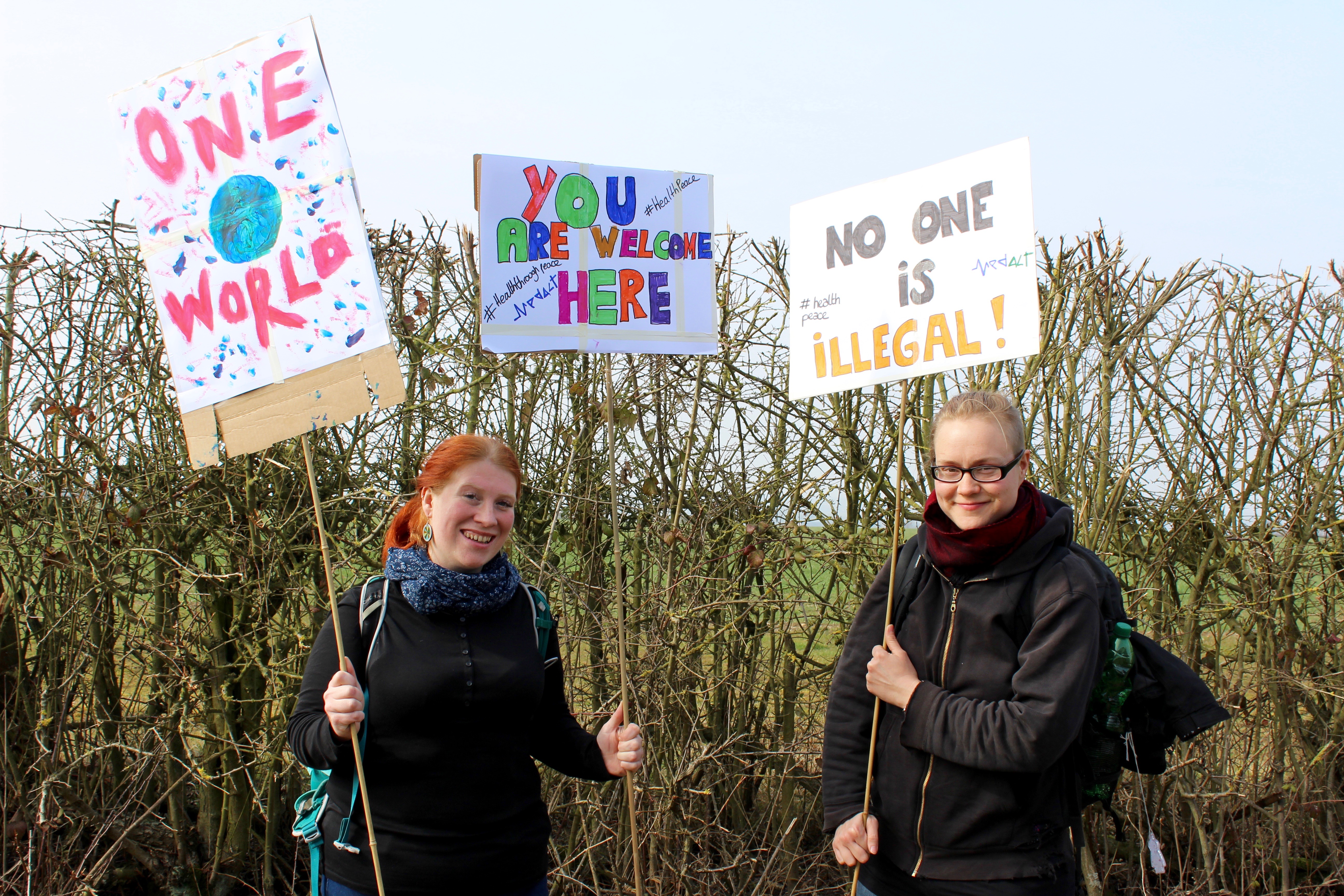 We are making prisoners of people seeking  asylum and a safe home from conflict and violence.

Yarl’s Wood has been the subject of much controversy, including serious allegations of abuse; yet the Home Office denied entry to a UN special investigator when a visit was requested.  An undercover journalist for Channel 4 recorded multiple incidences of racial abuse, threats of violence, self-harm by detainees and poor healthcare. In the documentary produced after this investigation, an incident was recorded of a pregnant woman bleeding, being sent to hospital where she miscarried her child, and the next day being taken back to Yarl’s Wood bleeding and in pain.

In an article for OpenDemocracy, Gemma Lousley, the Policy and Research Coordinator at Women for Refugee Women, writes:

“Women have told us how detention forces them to relive the trauma they experienced in their home countries. Levels of mental distress in Yarl’s Wood are unsurprisingly high: one in five of the women we spoke to told us that they had tried to kill themselves in detention, and 40% said they had self-harmed. More than half had been placed on suicide watch while detained.”

The physical and mental effects of this sort of indefinite incarceration for people who have committed no crime, are devastating.

So let’s take a step back and refer to Article 14 of the Universal Declaration of Human Rights: ‘Everyone has the right to seek and to enjoy in other countries asylum from persecution’. Let’s remind ourselves that this declaration was ratified by all members of the UN General Assembly in 1948.

Yet places like Yarl’s Wood detain the victims of violence – not the aggressors. They inflict further trauma upon refugees, and then deport them back to the place they were forced to flee from. 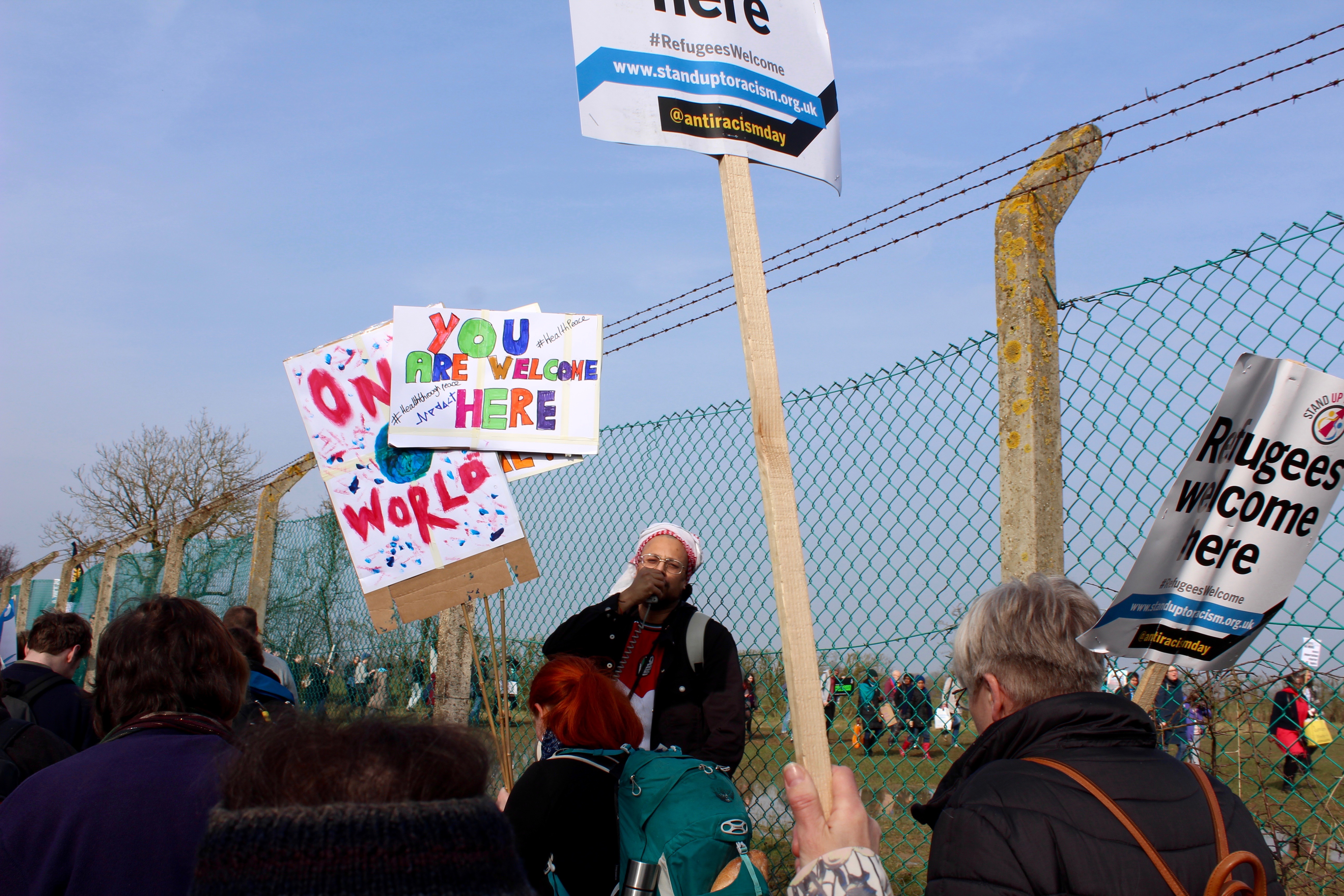 Places like Yarl’s Wood detain the victims of violence – not the aggressors. They inflict further trauma upon refugees, and then deport them back to the place they were forced to flee from.

During the protest, women inside Yarl’s Wood spoke to us on the phone, over a speaker. One of these women was called Mabel – she has been detained in Yarl’s Wood for 22 months. She spoke about what the demonstration meant to the women inside: showing them that they are ‘not alone’ and that ‘there are people who really care for us.’ You can listen to her message in the recording below.

When the protest was over, we were privileged to be able to walk freely away from the site, and leaving those women and children behind these walls was heart-breaking. Yet hearing that our presence encouraged them and gave them strength was wonderful. It is very powerful to be able to fight for a cause directly alongside the people who are most affected.

If you would like to get involved with Medact’s Refugee Solidarity Group or find out more about the call to shut down #Yarlswood, please contact Pauline at [email protected].