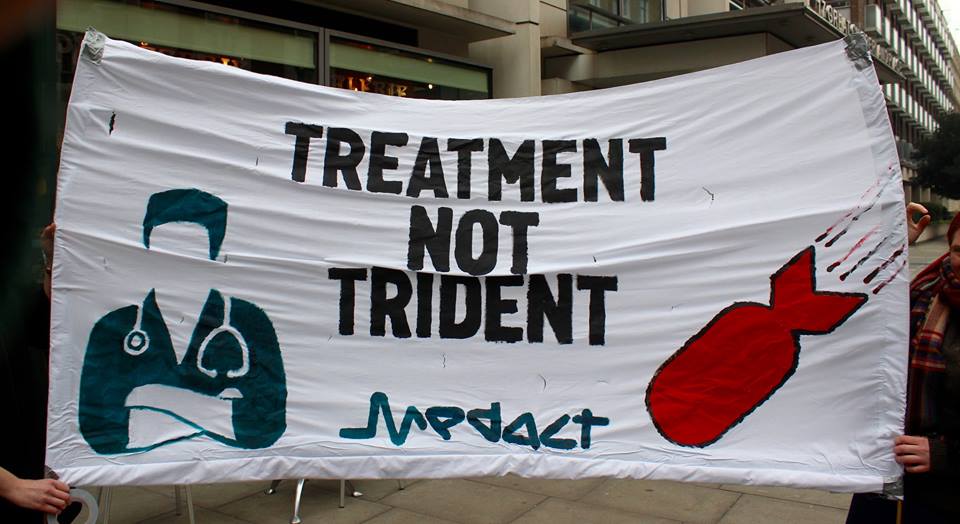 On Monday 18 July, Trident renewal will be debated and voted on in Westminster. We are calling on our members to tell their MPs to speak out against Trident renewal and support international efforts to establish a treaty banning nuclear weapons.

Contact your MP: Adapt our sample email below. We encourage you to use the information it contains, but do make it personal as this is far more effective.
Lobby your MP: Join the CND mass lobby on Wednesday

I am asking you to do all you can to halt the renewal of the UK’s nuclear deterrent system, Trident. Trident renewal will be debated and voted on in Westminster on Monday 18 July and it is vitally important MPs take the opportunity to speak out against the renewal of Trident, which would cost an estimated £205 billion.

As a member of Medact, a global public health charity, my opposition to Trident renewal is informed by the unacceptable risk to humanity posed by nuclear weapons. The explosion of less than 0.5 per cent of the world’s current nuclear weapons in a limited, regional nuclear war would disrupt the global climate and could lead to more than a billion people round the world facing starvation.

With more than 1, 000 nuclear warheads on high alert across the world and all nuclear-armed nations investing heavily in the modernisation of their arsenals, it is clear that there are continuing risks from the use of nuclear weapons.

The 1970 Nuclear Non-Proliferation Treaty pledges that Britain will “pursue negotiations in good faith on effective measures relating to cessation of the nuclear arms race at an early date and to nuclear disarmament.”

The International Red Cross Red Crescent Movement, the World Medical Association and other health organisations have called for the prohibition and elimination of nuclear weapons because they contravene humanitarian law and pose unacceptable risks to humanity.

Nuclear weapons are the only weapons of mass destruction not explicitly prohibited in international law. A clear majority of countries has now pledged to fill this legal deficit, and a UN working group has begun meeting to advance this goal.

On Monday 18 July there is now a unique opportunity for MPs to urge Parliament to back these international efforts to establish a treaty banning nuclear weapons, and to halt the renewal of Trident. Our possession of nuclear weapons will not keep us and the world safe. Instead, we should release billions of pounds and create international political capital that would allow us to address today’s real security threats, including climate change, poverty and terrorism.

I will be happy to meet with you to discuss this further. I look forward to your reply.