The Global South is being drained of resources by the rest of the world and it is losing far more each year than it gains. Africa alone loses $192 billion each year to the rest of the world. This is mainly in profits made by foreign companies, tax dodging and the costs of adapting to climate change. Whilst rich countries often talk about the aid their countries give to Africa, this is in fact less than $30 billion each year. Even when you add this to foreign investment, remittances and other resources that flow into the continent, Africa still suffers an overall loss of $58 billion every year. The idea that we are aiding Africa is flawed; it is Africa that is aiding the rest of the world. 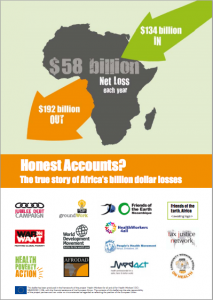 This money that Africa loses each year is over one and half times the amount of additional money needed to deliver affordable health care to everyone in the world. If the rest of the world continues to raid Africa at the same rate, over the next 10 years $580 billion will be lost by the African people.

Many of Africa’s loses directly benefit rich countries. They are a result of policies and practices that drain Africa and keep its people in poverty. These include tax dodging, unfair trade policies and the practices of multinational companies, and the brain drain of skilled workers.